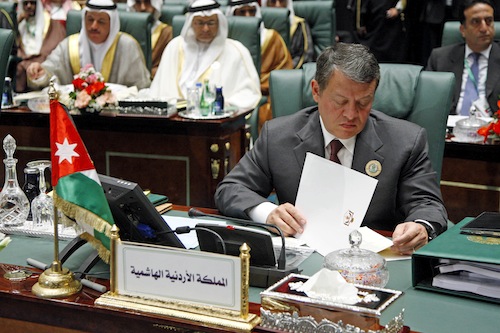 President Mahmoud Abbas and Jordan’s King Abdullah on Sunday signed an agreement to reiterate the king’s custodial role of Jeruslaem and its holy sites but also the “common goal of defending” the Holy City against attempts to Judaise it.

“His Majesty King Abdullah II and Palestinian President Mahmoud Abbas signed in Amman today a historic agreement, in which President Abbas reaffirmed that His Majesty King Abdullah II is the Custodian of the Holy Sites in Jerusalem, and has full right to exert all legal efforts to safeguard and preserve them, especially al-Masjid al-Aqsa,” the Palace said in a statement.

Abbas flew to Amman on Sunday at the Royal Palace to meet with king Abdallah to hold a  session of talks regarding the latest developments.

“The agreement will help Jordan and Palestine exert all efforts to protect Jerusalem and its Holy Sites from Israeli escalatory Judaisation and aims at protecting hundreds of Waqf properties that are endowed to al-Aqsa Mosque,” the statement continued.

“It also reaffirms the historic principles upon which Jordan and Palestine are in agreement as regards Jerusalem and their common goal of defending Jerusalem together, especially at such critical time, when the city is facing dramatic challenges and daily illegal changes to its authenticity and original identity.”

Al-Aqsa Mosque is the third holiest site in Islam and is located in the Old City of Jerusalem known to Muslims as Al-Haram Al-Sharif,

But it is also Judaism’s most sacred place of worship, venerated by Jews as Temple Mount.

It is one of the most sensitive sites in Jerusalem, and clashes frequently break out between Palestinians and Israeli security forces.

srael occupied East Jerusalem in 1967 and later annexed it in a move never recognized by the international community.