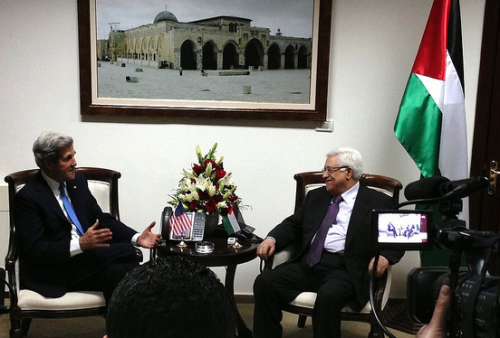 Kerry offered to release all Palestinian funds and to ensure Israel does not withhold Palestinian tax revenue in the future, and to extend the Palestinian Authority’s jurisdiction, particularly in Area C , according to Maan.

The 60 percent of the West Bank under exclusive Israeli control.

According to AFP, Abbas seeks a return to direct talks, but demanded that Israel must stop illegal settlement building and release Palestinian prisoners.

The last round of direct negotiations collapsed in late 2010.

Kerry is on a 10-day tour, met with Turkish foreign minister Ahmet Davutoglu in Istanbul before meeting with Abbas.

“Turkey can be a key, an important contribution to the process of peace in so many ways,” Kerry told reporters in a joint press conference.

Meanwhile, a rocket was fired from the Gaza Strip on Sunday. The rocket crashed into southern Israel as US Secretary of State John Kerry arrived for talks with Israeli and Palestinian leader.