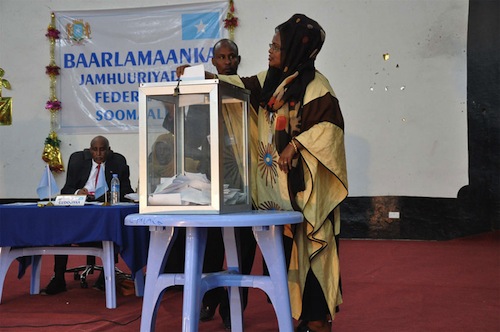 The Security Council welcomed the recent adoption of Somalia’s provisional constitution, the inaugural meeting of its new parliament and the appointment of that body’s speaker, and called on all parties to continue to work together to bring a swift end to the country’s transition.

The Council welcomed these “landmark” events in a statement issued to the press, after receiving a closed-door briefing on the latest developments on Tuesday from the Secretary-General’s Special Representative for Somalia, Augustine Mahiga

Professor Mohammed Osman Jawari was selected as speaker of the New Federal Parliament that was inaugurated on 20 August, in an election that laid the groundwork for an imminent round of voting to appoint the Parliament’s Deputy Speakers. This, in turn, would be followed by the election of the Horn of Africa nation’s President.

Some 260 Members of Parliament have now either been sworn in or are pending imminent ratification, with 15 names still remaining before the new Somali legislature reaches its total of 275 constituents.

After decades of warfare, Somalia has been undergoing a peace and national reconciliation process, with the country’s transitional governing arrangements winding down with the implementation of the so-called Roadmap for the End of Transition.

“The members of the Council called on the new Federal Parliament to discharge its responsibilities with independence, transparently and free from undue influence or coercion,” said the statement.

They also underlined the importance of a fully functioning Parliament and that the remaining seats should be agreed and filled as quickly as possible.

In addition, the Council members urged all signatories to the so-called Roadmap for the End of Transition to continue to work together and bring a swift end to the transitional governing arrangements.

“They called on the signatories to refrain from unilateral action and to continue the process of dialogue and compromise,” the statement noted. “They underlined that Parliament should now elect a president without further delay.”