Posted on: August 6th, 2012 by AlYunaniya Staff No Comments 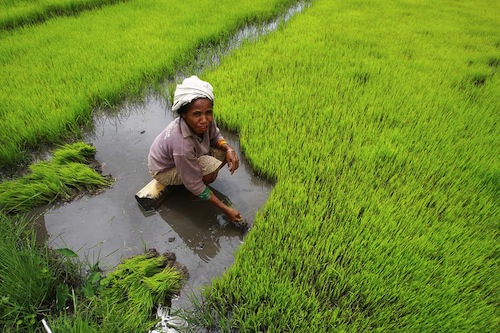 The United Nations Food and Agriculture Organization (FAO) said that global rice paddy production for 2012 is expected to be lower than originally expected, owing to below normal monsoon rains in India.

The July 2012 issue of the Rice Market Monitor, released by FAO today, says that production is expected to total 724.5 million tonnes – a 7.8 million tonne downward revision compared to the original forecast in April. But global output should still slightly surpass the results achieved in 2011.

“The downward revision was mainly the result of a 22 per cent lower-than-average monsoon rainfall in India through mid-July, which is likely to reduce output in the country this season,” FAO stated in a news release.

Also, unlike with maize and wheat, rice prices have remained “surprisingly stable” after gaining two per cent in May. “Amid abundant rice supplies and stocks, the likelihood of a strong price rebound in coming months is minimal, but the future direction of rice prices remains uncertain,” said FAO.

Some countries are expected to see production gains, including China, Indonesia and Thailand, along with several other Asian nations. Production in Africa may increase by as much as three percent, while Australia’s rice harvest was 32 per cent higher than last year.

Prospects are also good for Bolivia, Colombia, Guyana, Peru and Venezuela, but poor precipitation and shifts towards more remunerative products in Brazil, Argentina, Paraguay and Uruguay are behind a seven per cent drop of production in Latin America and the Caribbean as a whole.