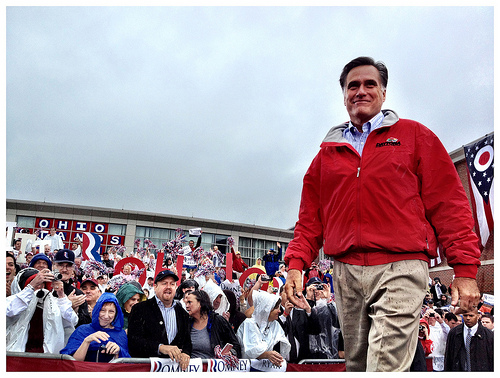 In a video, released Tuesday by American magazine Mother Jones, Republican presdiential candidate Mitt Romney tells donors at a May 17 fundraiser that peace in the Middle East is not possible hinting that efforts for Mideast peace under his administration would languish.

“You move things along the best way you can. You hope for some degree of stability, but you recognize that this is going to remain an unsolved problem – and we kick the ball down the field and hope that ultimately, somehow, something will happen and resolve it,” Romney said.

Romney, who has frequently criticized Obama for damaging relations with Israel, added: “The idea of pushing on the Israelis to give something up to get the Palestinians to act is the worst idea in the world.”

In response to Romney’s remarks, the PLO’s envoy to the US Maen Areikat on Tuesday said  comments about the Palestinians showed a “complete ignorance” of the facts, according to Maan news.

“Romney’s allegations that Palestinians are committed to the destruction of Israel are baseless given the fact that Palestinians have expressed support for the two-state solution, and repeatedly recognized Israel’s right to exist.”

Areikat added according to Maan news: “The best way the Republican nominee can help in resolving the Israeli-Palestinian conflict is by adhering to long-standing US policy regarding an acceptable solution that will lead to the end of military occupation of Palestine, peace, and security.”

At a speech in Jerusalem in July, Romney outraged Palestinians when he hailed Jerusalem as Israel’s capital.