Posted on: December 3rd, 2014 by AlYunaniya Staff No Comments 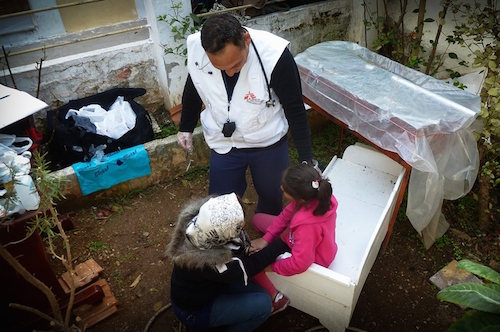 Thousands of refugees arriving on the shores of Greece’s Aegean islands are being welcomed with a dysfunctional reception system and inhumane living conditions, according to Médecins Sans Frontières (MSF). Greece and the European Union (EU) must urgently improve living conditions for refugees, migrants and asylum seekers, and offer them adequate medical assistance and protection.

According to the authorities, this year more than 14,000 people – of whom more than 90 percent are fleeing war-torn Syria – have made the perilous journey in small boats across the Aegean sea from Turkey to the Dodecanese islands, in search of protection. With too few suitable facilities to host them, many refugees find themselves forced for days at a time to sleep outside in the cold and rain or in badly overcrowded police station cells while waiting to be transferred to the Greek mainland.

“Over the past four months, we have seen no will to improve the reception system,” says Kostas Georgakas, MSF field coordinator. “No medical screening is provided for the arrivals and, more importantly, vulnerable people are neglected. Recently a group of doctors from the Ministry of Health was sent to screen refugees for Ebola – despite the fact that most refugees come from Syria and Afghanistan, not from West Africa. But those suffering cardiovascular problems or diabetes receive nothing.”

The Greek authorities have a responsibility to conduct vulnerability screenings and provide adapted care for these people, yet a lack of resources and political will means little concrete action has been taken on the ground.

“We have seen intolerable overcrowding, with 53 people crammed into a cell meant for six,” says Georgakas. “These conditions are unbearable for even one night, especially for people already suffering physically and psychologically from fleeing war. What little they are offered after such a grueling journey is shameful, and is dangerous for their health.”

As a result of the deplorable reception conditions, an MSF mobile team has launched two emergency operations in the Dodecanese islands since late August. In that time, the team has provided medical care to more than 350 refugees and distributed more than 3,000 kits of essential relief items including sleeping bags, soap and other hygiene items.

Patients have told MSF teams that they were pushed back to Turkey before eventually being able to reach Greek shores. Greece has the obligation to honor the fundamental rights of all persons under its jurisdiction, regardless of nationality. States must, at all times, guarantee the non-refoulement of refugees and asylum seekers from territorial lands and waters, and ensure that those persons receive decent treatment upon arrival, including access to an efficient and equitable asylum procedure.

“Greece closed its land borders and now it must respond to the flow of refugees arriving on the Aegean islands with the dignity and respect that these people deserve,” says Manu Moncada, MSF’s operations coordinator for migration. “Higher fences and inhumane living conditions on the islands will not deter the desperate, who will be forced to take ever more dangerous routes in search of safety, with many losing their lives in the process.”

Since 2008, MSF has responded to the urgent medical and humanitarian needs of newly arrived migrants in Greece, as well as to asylum seekers and migrants in administrative detention. In collaboration with two Greek organisations, MSF is also providing medical rehabilitation for victims of torture in Athens.