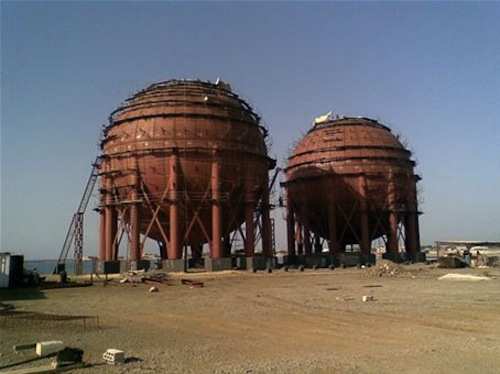 Liquefied petroleum gas (LPG)  shipments  worth at least 55$ million each month delivered by Naftomar’s “Gaz explorer” arrive at the port of Banias, supplying Syria’s Assad, according to Reuters.

Naftomar, a known firm in Greece, whose leading figure is a Syrian national, with links to Greece’s shipping elite and ties to Lebanon was founded by Talal Zein in Beirut . Since its establishment in Beirut, Lebanon in 1972 as a trading house, concentrating on the distribution of petroleum products in the Mediterranean region, Naftomar has since developed to become a major player in the LPG field with a fleet of more than 20 vessels.

International sanctions imposed against Syria do not apply to liquefied petroleum gas (LPG) for humanitarian reasons. “We would tend to feel that it is unfair to deny such a basic commodity as LPG to consumers as part of a political statement. Currently there is no embargo to supply LPG to Syria which we believe is for humanitarian reasons,” Naftomar’s commercial director J.C. Heard said in a statement  to Reuters. Syria is under international scrutiny because of the violent crackdown on protests against President Assad International sanctions have halted Syrian oil exports since September 2011, stretching budget revenues.

Rebels have recently attacked and, destroyed a section of the pipeline bringing crude oil to a refinery in the city of Homs. This one facility, capable of processing 107,000 barrels per day, accounts for 45 per cent of Syria’s total refining capacity. The country possesses only one other refinery, in the coastal city of Baniyas, which can process 133,000 barrels per day. That has made Syria more than ever dependant on foreign deliveries.

Russia and Venezuela, Syria’s long-lasting allies still send cargoes of other fuels, including diesel which can be used to run army tanks . “We’ve sent Syria two cargoes of diesel and shipments will continue as they are needed,” Venezuela’s Oil Minister Rafael Ramirez told reporters during a signing ceremony with Chinese officials in Caracas.