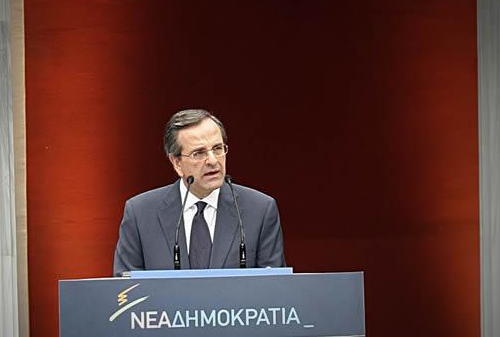 New Democracy leader Antonis Samaras set out his party’s economic proposals for the May 6 elections on Sunday, promising lower taxes, lower state spending, and the selling of assets to drive Greece out of its crisis. “The coming elections are the most critical since of the dictatorship in 1974″ said Samaras at the beginning of his speech. “Our goal is to change it all”, he added in his speech at Zappeion, according to Kathimerini.

Antonis Samaras said that he would increase low pensions and reintroduce benefits for big families and farmers. He said this would cost about EUR 550 million a year and that this money could be gained by increasing the tax on gambling games and reducing the deficits of public enterprises.

He added that retail bondholders would be compensated for the haircut; he also noted that he would not accept scraping the so-called 13th and 14th salaries.

ND leader reiterated his plan to introduce a 15% flat tax for businesses and reduce value added tax to 19%, 9% and 5%. Also, tax breaks will be put in effect for foreigners who want to settle in Greece. According to media reports, Samaras added that he would not introduce new levies and would tell Greece’s lenders: “There is no more money for taxes.”

According to Bloomberg, he argued for the need to release more funds from small businesses once the recapitalization of the Greek banks has been completed and said he would push for some EUR 6.5 billion owed by the Greek state to firms to be paid as soon as possible.

Samaras announced his plan to tackle bureaucracy, by limiting the number of ministries to 10 (from 15 today).

According to SKAI television, ND leader insisted that his government programme could not be implemented if it formed a coalition government with the Socialists.

He attacked PASOK, stressing that ” it has no plan” but only “to create and maintain the party’s armies” and addressing the left he said that “they wait for the crisis, hope the crisis and feed on the crisis.”