No breakthrough in efforts to restart Israeli-Palestinian talks 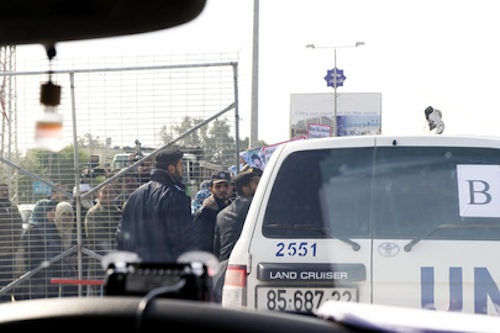 The past month has been characterized by a continuation of the effort to restart direct talks between the Israelis and the Palestinians amid continued worrying developments on the ground, a top United Nations official said yesterday.

The Special Coordinator for the Middle East Peace Process, Robert Serry, told an open debate of the Security Council that “quiet direct exchanges” between the parties are ongoing in an attempt to reach agreement on a package of measures that would create an environment conducive to talks and pave the way for high-level contacts.

The Israelis and the Palestinians have yet to resume direct negotiations since talks stalled in September 2010, after Israel refused to extend its freeze on settlement activity in the occupied Palestinian territory.

“In sum, the effort to restart direct talks has not reached a breaking point, but there has not been a breakthrough either and that is increasingly a concern,” said Serry. “While talks remain stalled, events on the ground continue to move in the wrong direction.”

Among other things, the Palestinian Authority faces an acute challenge in maintaining its solvency. It announced at the start of the year that it owed $1.1 billion in bank loans and $400 million to the private sector. It also expects a $1 billion shortfall in funding towards its $3.5 billion budget for 2012.

In addition, settlement announcements continued this month, as have clashes between Israeli settlers and Palestinians, Palestinian attacks on Israelis in the West Bank, and violence in Gaza.

“The international community should understand that, absent a credible political horizon for the establishment of a Palestinian State living side-by-side in peace and security with Israel, its own efforts in pursuit of this goal will increasingly lack credibility,” Serry told the meeting, which was expected to hear from around 40 delegations.

“The parties must now do their part to overcome admittedly difficult obstacles and take the steps necessary to enable an environment conducive to serious engagement,” he added. “But I fear time is running out.”

The envoy also reported on the increasing violence in Syria, and the possible spill-over to other countries in the region, adding that nowhere else does the impact of the Syrian crisis loom larger than in Lebanon.

He cited a continuing pattern of Syrian army violations of the Lebanese-Syrian border, including intermittent shelling from Syria, as well as cross-border incidents and a brief incursion by Syrian soldiers.

Adding to the almost 30,000 Syrian refugees registered with the Office of the UN High Commissioner for Refugees (UNHCR), the surge in the number of Syrians crossing into Lebanon last week was estimated at some 18,000 over a two-day period, many of whom have travelled back into Syria.

Over 10,000 people, mostly civilians, have been killed in Syria and tens of thousands displaced since the uprising against President Bashar al-Assad began some 16 months ago.