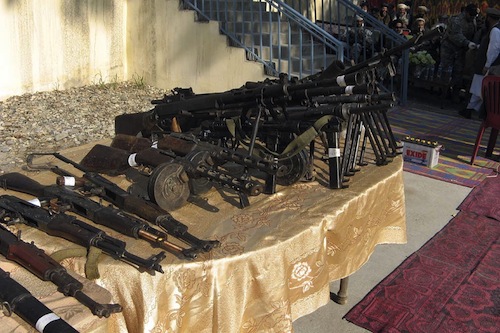 At an historic gathering on the issue of conventional arms, Secretary-General Ban Ki-moon urged Member States to work towards a treaty to regulate the trade in such weapons, stressing that a set of rules on this matter is long overdue.

“We have made some progress on weapons of mass destruction issues over the years, but the international community has not kept pace on conventional arms,” Ban told Member States at the opening of the first UN Conference on the Arms Trade Treaty. “Nuclear issues capture headlines, but conventional arms are killing people everyday.”

Taking place at UN Headquarters in New York over the next four weeks, the Conference has brought together the UN’s 193 Member States to negotiate what is seen as the most important initiative ever regarding conventional arms regulation within the United Nations, according to the Conference organizers.

“An Arms Trade Treaty will aim to create a level playing field for international arms transfers by requiring all States to abide by a set of standards for transfer controls, which will ultimately benefit the safety and security of people everywhere in the world,” the Conference’s website notes.

“An agreed set of standards for arms exports along with strict national legislation can help begin to change all of that,” Mr. Ban told Conference attendees. “But it will do even more. It will improve our ability to deliver across the board, from promoting social and economic development to supporting peacekeeping and peacebuilding; from monitoring sanctions and arms embargoes to protecting children and civilians; from promoting women’s empowerment to fostering the rule of law.”

The UN chief highlighted that this is the first time that Member States are gathering at the UN to negotiate a treaty regulating the international conventional arms trade. “Everyone in this room is making history,” he told Conference participants.

“Our common goal is clear: a robust and legally binding Arms Trade Treaty that will have a real impact on the lives of those millions of people suffering from the consequences of armed conflict, repression and armed violence. It is ambitious – but it is achievable,” Mr. Ban added.

Ban also spoke today with the representatives from non-governmental organizations that have petitioned for arms treaty negotiations.

“With your petitions and declarations today, you are reminding the world that we need to act.” Mr. Ban said at a press stakeout. “I always feel honoured when I receive appeals from citizens of the world who are pressing the United Nations, and Member States, to address urgent issues which we are now dealing with.”