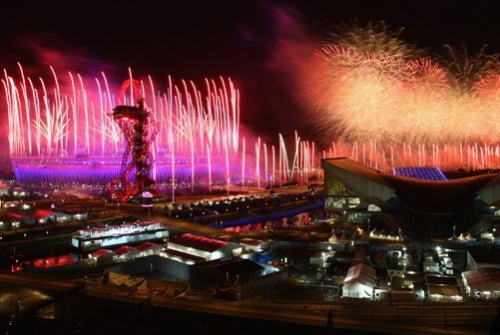 The world’s eyes were turned to London’s Olympic Stadium on Friday where the opening ceremony kick off with a vibrant and high-spirited celebration of British art and culture.

Among the approximately, 60, 000 audience watching the event, were celebrities, dignitaries including U.S. First Lady Michelle Obama as well as presidents, prime ministers and European royalty, according to Reuters.

More than a billion more people around the world watched the official start to 17-day event where  16,000 athletes from 204 countries around the globe will compete.

The traditional parade of nations at the opening ceremony saw the athletes marching behind the flags of the 204 participating nations. Greece had the lead, as the spiritual home of the games, and Team Great Britain was last, as the host.

Brunei and Bahrain featured female flagbearers. The London Games 2012 is set to be the first Olympics in history whereby every participating nation will have at least one female representative. Three Saudi women marching behind the men in their delegation flashing victory signs with their fingers.

Following a bid headed by former Olympic champion Sebastian Coe and the then Mayor of London Ken Livingstone, London was selected as the host city on 6 July 2005 during the 117th IOC Session in Singapore, defeating bids from Moscow, New York City, Madrid and Paris. London will become the first city to officially host the modern Olympic Games three times, having previously done so in 1908 and in 1948.