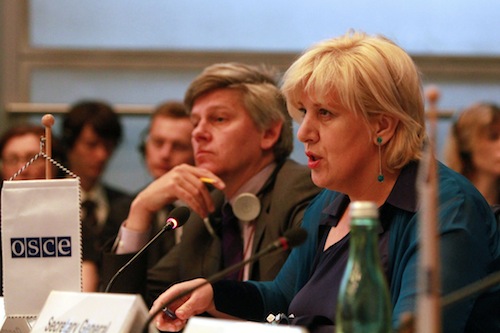 Dunja Mijatović, the OSCE Representative on Freedom of the Media, yesterday expressed concern over the new charges brought against Turkish investigative journalist Ahmet Şık, and called on the authorities to protect the right to free expression in the country.

“I am concerned about the new indictment brought against Ahmet Şık, which threatens him with three to seven years’ imprisonment for comments he made upon leaving Silivri prison in March,” said the Representative. “The new charges add to the climate of intimidation that Turkish journalists face when expressing critical or differing views.”

Ahmet Şık was released pending trial on 12 March 2012, after spending one year in pre-trial detention. In the trial that continues in September, he faces up to 15 years in prison for membership of an alleged terrorist conspiracy known as Ergenekon. Upon leaving prison, he accused judges, prosecutors and police officers of a conspiracy that put him, among many others, in prison, and said that justice would be served when those officials were imprisoned. The new charges, collected by 39 judges and prosecutors, accuse him of threatening and insulting public officials.

“I hope that the charges against Ahmet Şık will be dropped soon. Freedom of expression can not stop at speech deemed appropriate by the authorities. In democracies even critical and offending statements must be protected by the law, and public officials must tolerate a higher level of criticism from society,” Mijatović said.

“Authorities should fight speech they deem offensive by encouraging more speech and greater debate of all issues of public importance,” the Representative added. “Punishing critical statements with imprisonment or the threat of incarceration not only runs against OSCE commitments that Turkey has taken upon itself to meet, it also significantly harms pluralistic discourse and can lead to silencing democratic debate in society.”

During her visit to Turkey last December, Mijatović called for the release of all journalists from prison, and in March she publicly welcomed the release, pending trial, of Ahmet Şik and other journalists.