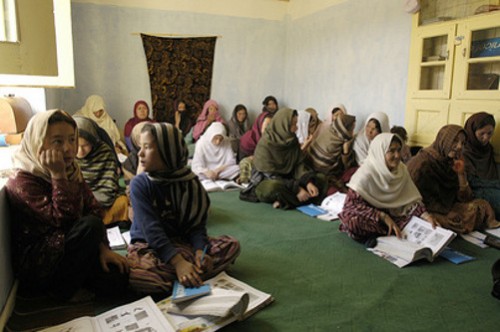 Parts of Pakistan are among the most dangerous places in the world to go to school. Abandoned schools, which continue to remain as piles of rubble across Pakistan’s north-west bring into question the government’s level of commitment to seeing children return to school in safety.

96 schools were attacked in Pakistan this year alone. Most of these attacks took place in Khyber Pakhtunkhwa province (KP) and the Federally Administered Tribal Areas (FATA) bordering Afghanistan. Fourteen attacks were reported from Mohmand Agency in the tribal areas. Dozens of attacks were reported from various districts of KP. Thirteen schools were attacked in Swabi district, 12 in Charsadda district, and 11 in Mardan district. Schools have also been attacked in Balochistan and Sindh provinces. The United Nations reported 152 incidents of partial or complete destruction of school facilities in FATA and KP in 2011.

Malala Yousafzai, a 15-year-old student and outspoken advocate for children’s right to education, was shot in the head and neck on October 9, 2012, leaving her in critical condition. The Tehreek-e-Taliban Pakistan claimed responsibility for the attack. The attack garnered condemnation from across the political spectrum in Pakistan, and the international community.

However, what is happening in the country is more than just the case of the shooting of one brave girl, but a crisis for the entire Pakistani education system. Just three days later, Shia university students were critically hurt when extremists threw acid at their faces while they were on their way home to Parachinar, in FATA, after taking exams in Kohat, KP. The Tehreek-e-Taliban Pakistan claimed responsibility for this attack as well.

Non-governmental organization workers in FATA and KP have also been targeted for their work on education. In July, Farida Afridi, a women’s rights activist was murdered, apparently for her work on girls’ education and women’s empowerment in Khyber Agency, FATA.

The situation seems to be more than alarming, and the population has little if no possibility to oppose resistance to the flood of violence women and children are faced with.

Pakistan’s federal government should cooperate with provincial authorities to create a rapid response system whenever there are attacks on schools. The facilities should be repaired and destroyed educational material replaced so that children can return to school as soon as possible.

It is time Pakistani authorities understood that those who seek to harm students and teachers wish to rob Pakistan of its future.