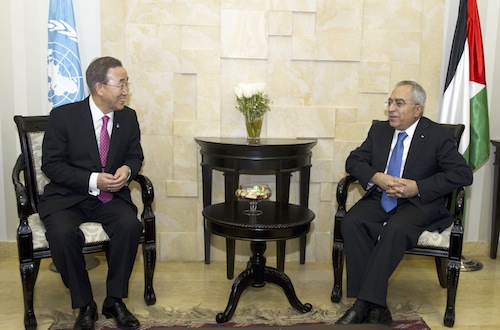 Palestinian President Mahmoud Abbas accepted on Saturday the resignation of Prime Minister Salam Fayyad and asked him to stay at his post until a new government is formed.

Fayyad offered his resignation on Thursday, but Abbas did not respond to Fayyad’s offer until Saturday.

Fayyad’s resignation is thought to be a blow to the US government as he was expected to play a key role in U.S. efforts to revive peace talks, according to the Associated Press.

Abbas tasked Fayyad with the role of caretaker for the current government until a new prime minister is appointed, an official told WAFA news agency on the condition of anonymity.

Abbas and Fayyad had been at odds over the extent of the prime minister’s authority. But the conflict between the two reached its peak last month over the resignation of Fayyad’s finance minister, Nabil Kassis.

Fayyad accepted the resignation, but Abbas then overruled the prime minister.

Fayyad , 60, has served since mid-2007 as prime minister of the Palestinian Authority.

According to sources Fayyad in recent days had told close friends that he was determined to leave. The prime minister also complained about what he said was an attempt by leading Fatah members to undermine him.

Last week, for the first time, the Fatah’s Revolutionary Council openly criticized Fayyad’s government over its economic policy, according to AFP.

Recently, he US has unblocked almost $500 million in aid to the Palestinian Authority as it faces its worst economic crisis in years.

The move comes months after Congress froze Palestinian aid in response to its bid for non-member observer status at the UN.

The news came after US President Barack Obama met with Israeli and Palestinian leaders in a visit to Israel and the West Bank in what was his first trip to the region since taking office in 2009.

The Palestinian Authority’s current economic crisis is largely due to absence of promised aid.