Posted on: June 21st, 2012 by AlYunaniya Staff No Comments 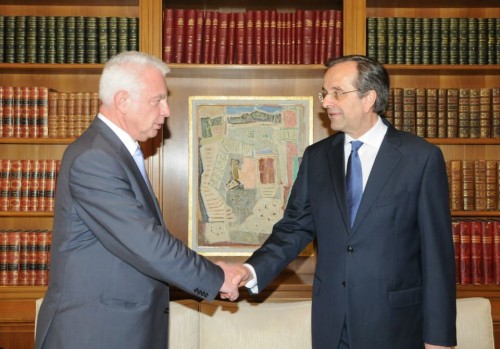 Antonis Samaras was sworn in as prime minister on Wednesday and his coalition cabinet is due to be named on Thursday as the unity government begins its to pull the debt-stricken country back from the brink of bankruptcy.

“With God’s help, we’ll do everything we can to pull the country out of the crisis as soon as possible,” Samaras said after the swearing in ceremony at the Presidential palace in Athens.

“I will ask the new government to work hard and offer the Greek people tangible hope,” he added.

During the handover outgoing caretaker Premier Panayiotis Pikrammenos,wished Samaras good luck and told him: ”You have many battles ahead of you, inside Greece and abroad.”

Samaras has vowed to revise the EU-IMF bailout deal and rid the country of undocumented migrants.

Samaras, Venizelos and Kouvelis decided that the new government would comprise 15 ministers and about 20 deputy ministers, according to Kathimerini. This represents a significant reduction from the 49 ministers and deputies that served in the interim cabinet under Lucas Papademos.

The new prime minister wants to create separate tourism and merchant marine ministries. These departments had been absorbed into the Development Ministry. The re-establishment of the Macedonia-Thrace Ministry is also on the cards, according to Kathimerini.

Samaras, Venizelos and Kouvelis held talks on Wednesday night with caretaker Finance Minister Giorgos Zannias and National Bank President Vassilis Rapanos, candidate for the post. Zannias will represent Greece at Thursday’s Eurogroup meeting and it was decided The Eurogroup is due to meet in Brussels on Thursday, where Greece’s situation is to be discussed.