Posted on: February 16th, 2012 by Julie Jalloul No Comments 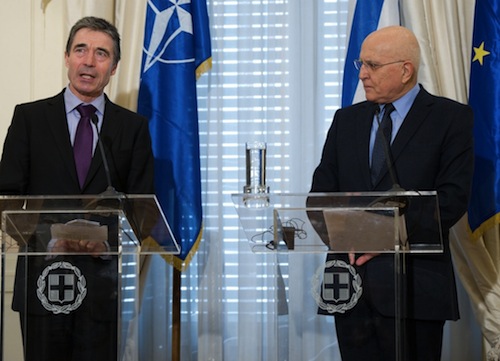 NATO Secretary General Anders Fogh Rasmussen paid a visit to Minister of Foreign Affairs Stavros Dimas amid the 60th anniversary of Greece’s membership in the Atlantic Alliance since 1962. The Turkish threats and recent Turkish over flights on Agathonisi Island were high on the agenda of yesterday’s visit. The systematic dispute of Greece’s sovereign rights by Turkey is, and is being treated by the Greek people as, a real and direct threat. In that light, Greece’s participation has not managed to respond to this significant threat,” the foreign minister said.

In discussions with Mr. Dimas the issue of Skopje fell on the table, where Mr. Rasmussen reiterated his firm position that the Alliance before joining the former Yugoslav Republic of Macedonia (FYROM) in NATO should resolve the name issue. They also discussed the Greek contribution in Afghanistan, where Greece reiterated that although it will reduce its assistance to ISAF it will keep its trainers for the Afghan army according to tovima. The Minister of National Defence did not omit to discuss the Greek positions on the new NATO military structure, and to discuss with him the assistance of Greece in peacekeeping operations.

The NATO Secretary General, who also met with Prime Minister Lucas Papademos and Defense Minister Dimitris Avramopoulos, praised Greece’s participation in NATO operations, with special emphasis on Libya. For NATO, the way forward is Smart Defence Mr. Rasmussen emphasized; a key topic for study in view of the NATO Summit in Chicago in May. “I would expect the NATO Summit in Chicago to make important decisions on enhancement of our partnerships with countries in North Africa and the Middle East in the wake of the Arab Spring.” That would be in the interest of Greece, but it would also be in the interest of the whole of Europe and the Euro-Atlantic area, he added.

The Secretary General also addressed a conference organized by the Greek think-tank Hellenic Foundation for European and Foreign Policy (ELIAMEP).In his speech, he referred to the difficult economic situation and the challenges to be faced by Greece,  while praising the historical contribution of Greece to NATO missions, and expressed confidence that Greece will continue to be active and present in them.