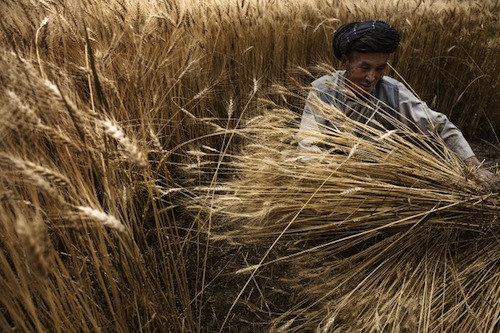 World food prices have held steady for another month with falling cereal and sugar prices offsetting gains in vegetable oils and dairy, the United Nations Food and Agriculture Organization (FAO) said, while also pointing to what could be a record wheat crop this year.

“First forecasts for the 2013 wheat harvest point to production increasing to 690 million tonnes – 4.3 per cent up on 2012,” according to FAO’s quarterly ‘Crop Prospects and Food Situation’ report.

“This would be the second largest crop on record,” FAO noted in a press release, below the record harvest of 700 million tonnes in 2011.

The hike is expected mostly in Europe, driven by an expansion in wheat planting areas in response to high prices and a recovery in yields from Russia and some other countries, FAO said.

The outlook in the United States, dampened by earlier drought conditions, has improved somewhat, the UN agency said.

Coarse grains and paddy crops are not yet planted making it too early for even a preliminary global cereal forecast, but FAO expects “generally favourable” prospects for the first 2013 coarse grain crops in the southern hemisphere. Rice prospects are also encouraging in several countries below the equator.

The report also surveyed the food security situations in developing countries, including several hotspots. Of the countries cited, FAO noted that insecurity in northern Mali has disrupted food commodity flows worsening an “already precarious” food situation created by a drought in 2011.

Meanwhile, FAO’s Food Price Index – which measures monthly changes in international prices of a basket of meat, dairy, cereals, oils and fats, and sugar – remained at 210 points for a second straight month.

The FAO Cereal Price Index dropped less than 1 per cent to 245 points in February, but still 8 per cent higher than last year at this time.

Prices for oils and fats averaged 206 points, up 0.4 per cent from January. The rise was driven mainly by palm oil, reflecting the expected seasonal production slowdown and reduction in inventories.

Dairy prices rose five points, or 2.4 per cent, to 203 points. Meat prices averaged 178, the same as in January, with marginally higher pork prices offsetting a slight dip in poultry.

Sugar prices declined for a fourth consecutive month on the expectation of a relatively large world production surplus. The FAO Sugar Price Index averaged 259 in February, down 3 per cent, or 8.6 points, from January.