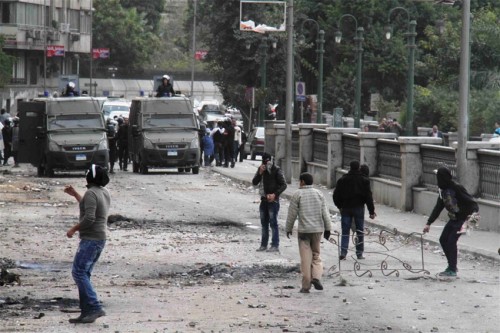 The government-proposed draft law in Egypt concerning public demonstrations would severely limit the right to peaceful public assembly and is open to abuse by police, Human Rights Watch said today in a letter to the president and the Justice Ministry.

The letter outlines concerns with the draft law in light of Egypt’s human rights obligations and international legal standards, and urges the government to make amendments. The Justice Ministry drafted the “Law on the Protection of the Right to Peacefully Demonstrate in Public Places.” The cabinet approved the final draft on February 12, 2013, and submitted the bill to the Shura Council, Egypt’s legislative body, on February 17.

“This law as drafted would severely restrict one of the key human rights that determine Egyptians’ ability to continue to call for bread, freedom, and social justice,” said Sarah Leah Whitson, Middle East and North Africa director at Human Rights Watch.

“Governments have a right to regulate demonstrations, but not to ban them for spurious reasons or to keep them out of sight and sound of every government building.”

It is unclear when the law might pass as the legislative agenda, procedures and time frame of the Shura Council are opaque.

Key concerns in the draft law are vague terms in article 4 prohibiting demonstrations that interfere with “citizens’ interests,” or that halt traffic or interfere with the right to work. Most problematically, any violation of article 4 would allow the police to forcibly disperse the protest, Human Rights Watch said.

This in effect amounts to collective punishment of protesters, since if one protester assaults a police officer, it would be sufficient grounds for the police to disperse the entire demonstration, even if the vast majority of demonstrators are peaceful, Human Rights Watch said.

Article 9 of the draft law would effectively bar demonstrators from coming within 200 meters of any national government, legislative or judicial building, as well as local government buildings. That restriction would place demonstrators out of sound and sight of virtually every official in the country, Human Rights Watch said. The requirement is excessive and restricts the essence of the right of citizens to convey a message to officials through peaceful assembly.

The draft law also lists a set of crimes in article 13 that are already fully criminalized by the penal code, such as assault or destruction of private or public property, imposes an additional penalty of a minimum of one week in prison, and an excessive fine of 20,000-50,000 EGP (US$3,000-7,400) for any violation of article 13. Article 13 also bans protesters from wearing masks or covering their faces, which would clearly discriminate against Egyptian women who wear the niqab.

Article 5 of the draft law would require demonstrators to submit a written notification three days in advance of a demonstration, and article 8 stipulates that the Interior Ministry must apply to a judge to cancel a demonstration. The article places no requirement for a timely response by the judge within the three-day period, however, which would create further uncertainty about the legal status of the demonstration. The law also fails to provide exceptions for smaller demonstrations that would cause no disruption, and for urgent and spontaneous demonstrations in response to news, Human Rights Watch said.

The law also fails to place clear limitations on how the police use force in dispersing protests, in terms of methods used and conditions of escalation, Human Rights Watch said. Instead of creating a clear obligation on the police in line with international standards to use force only if non-violent means are ineffective and to “exercise restraint in such use and act in proportion to the seriousness of the offence,”article 15 merely suggests that the police “should to the extent possible” take measures starting with warnings and then progressing to water canon or tear gas.  Article 16 further states that the police may use additional force as stipulated in the penal code and police law, which give the police excessive discretion in the use of live ammunition to disperse protests, Human Rights Watch said.

The draft law also restricts the right to demonstrate to Egyptian nationals, stating in article 2 that “citizens have the right to call for, organize and join [demonstrations].” The provision is discriminatory since international law provides this right for anyone on a country’s territory, Human Rights Watch said.

In a February 19 news release,the UN Office of the High Commissioner for Human Rights criticized the draft law, saying that it imposes “broad restrictions on public-order grounds and unduly limits the choice of places where assemblies may occur, while giving too much discretion to the Ministry of Interior to object to assemblies.”

As the UN Special Rapporteur on the rights to freedom of peaceful assembly and of association wrote in his May 2012 report, this “interdependence and interrelatedness with other rights make them a valuable indicator of a State’s respect for the enjoyment of many other human rights.”  “The best guarantee of respect for new laws passed by the Egyptian parliament is to ensure that the laws fully respect the rights at stake,” Whitson said. “The vicious cycle of violence Egypt has seen recently can only be addressed through police reform and accountability, not by giving the police and other state authorities more leeway to restrict demonstrations or use force against protesters.”