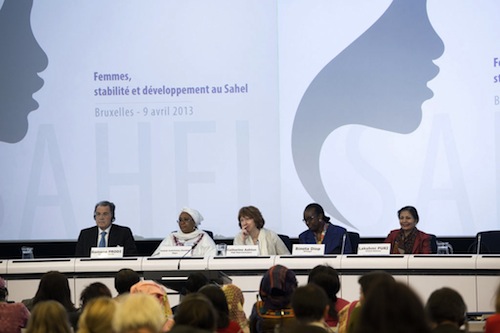 Dozens of women from the Sahel have met with the United Nations envoy to the region and the world organization’s top official for women’s issues, at a conference to recommend ways to boost economic recovery, political stability and conflict prevention in the troubled African region.

“Ultimately, the women of the Sahel will be instrumental in putting the region on a path to stability,” the Secretary-General’s Special Envoy for the Sahel, Romano Prodi, told the Conference on Women’s Leadership in Sahel in Brussels on 9 April.

“I want to tap into the potential of women to accelerate progress in the Sahel. The discussions that took place today and the recommendations by the participants will help us in seeking sustainable solutions for the Sahel.”

The participating group included some 40 women from Algeria, Burkina Faso, Chad, Mali, Mauritania, Niger, Senegal, as well as representatives from the African Union and the Economic Community of West African States (ECOWAS).

They presented their recommendations to Mr. Prodi, as well as the Acting Head of UN Women Lakshmi Puri, and Catherine Ashton, High Representative of the European Union for Foreign Affairs and Security Policy and Vice-President of the European Commission.

Today’s discussions helped shape a common vision on how to empower women to help political stability and economic prosperity in the Sahel ahead of the High-Level Donor’s Conference on Development in Mali to be held on 15 May in Brussels, speakers said.

“It is well established that for peace to be sustainable – a peace that extends beyond the simple act of signing a peace agreement – it needs to be rooted in justice and inclusion,” said Acting Head of UN Women and Assistant Secretary-General Lakshmi Puri.

“There can be no comprehensive strategy to address the sustained and systemic crisis without women’s full participation,” Ms. Puri reiterated, noting that numerous UN resolutions and the international community have stressed this idea.

“We hope this Conference will usher in concrete efforts to increase the participation of women and gender experts in conflict resolution and in the transition to peace, economic recovery, democracy and stability,” she added.

The Sahel region – which stretches from the Atlantic Ocean to the Red Sea – suffers from extreme poverty, with human development levels among the lowest in the world, porous borders that present security challenges, as well as significant human rights problems.

The recommendations of the Conference include ensuring that at least 30 per cent of participants in decision-making and politics are women, including through the adoption of pro-active measures.

Participants also agreed on the need for national governments, regional organizations and the international community to support an increased participation of women in conflict-resolution initiatives and to strengthen their entrepreneurial skills and access to services, according to UN Women. The participants also called for sustained and predictable financing for initiatives dedicated to gender equality.