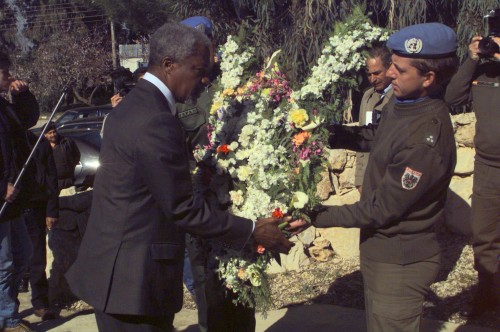 Satellite images showed that the Syrian army has not withdrawn all heavy weapons from cities, Kofi Annan’s spokesman, Ahmad Fawzi, said on Tuesday, as violence killed dozens of people across the country despite the presence of U.N. monitors, Alarabiya reported.

On the other hand, Syrian authorities have stated that they have withdrawn tanks from all cities.

The spokesman said Annan has reports that Syrian security forces might have killed people who had met with U.N. monitors, and that the international envoy will tell the Security Council that there is a need for “stronger presence” of monitors in Syria, Reuters reported.

“We have credible reports that when they leave, the gunfire starts again, that these people who approach the observers may be approached by the Syrian security forces or the Syrian army or even worse, perhaps killed and this is totally unacceptable,” Fawzi added.

Head of the Syrian National Council, Burhan Ghalyoun, has warned that “If violence persists, we might need to use force to protect civilians.”

At the same time, State TV reported that three people were wounded when the car bomb that went off in the Marjeh district in Damascus, blaming an “armed terrorist group”.

“An armed terrorist group detonated the car bomb near the Yelbugha complex in Marjeh, wounding three people and causing damage to nearby buildings,” it reported.

It also said the bomb was placed under the car of an unsuspecting man, who was among those injured.

The blast came as the Syrian Observatory for Human Rights said violence across the country killed approximately on Monday, despite the ceasefire.