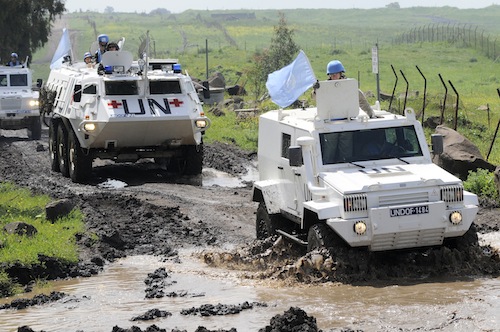 The Security Council today extended the mandate of the United Nations force monitoring the ceasefire in the Golan Heights between Israel and Syria until 31 December 2012.

The UN Disengagement Observer Force (UNDOF) was first established by the Council in 1974 to supervise the disengagement accord between Syrian and Israeli forces after their 1973 war.

In the unanimously adopted resolution extending the mission, the Council called on all parties to cooperate fully with the operations of UNDOF and to ensure the security of, as well as unhindered and immediate access for, the UN personnel carrying out UNDOF’s mandate.

It also stressed the obligation on both parties to “scrupulously and fully respect” the terms of the 1974 Disengagement of Forces Agreement, and called on them to exercise maximum restraint and prevent any breaches of the ceasefire and the area of separation.

In his latest report on the activities of UNDOF, Secretary-General Ban Ki-moon noted that, in the light of regional unrest, the situation in the Middle East is likely to remain tense for the foreseeable future.

He added that since the discontinuation of indirect peace talks in December 2008, there have been no negotiations between the parties, and the current crisis in Syria further complicates efforts towards Israeli-Syrian peace.

“Under the prevailing circumstances, I consider the continued presence of UNDOF in the area to be essential,” he stated.