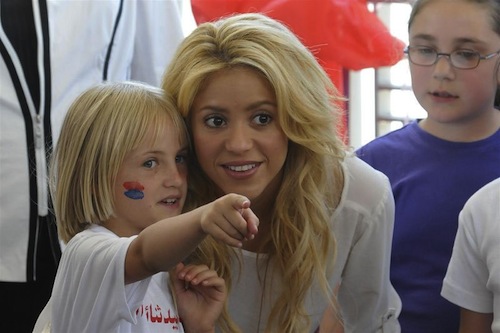 Renowned Colombian singer and song-writer Shakira, who is expecting her first child with Spanish football star Gerard Piqué, is helping to raise awareness on the world’s most vulnerable infants through an unusual method: an online baby shower hosted by the United Nations Children’s Fund (UNICEF).

“To celebrate the arrival of our first child, we hope that, in his name, other less privileged children in the world can have their basic needs covered through gifts and donations,” reads the invitation from Mr. Piqué and Shakira, who also serves as a UNICEF Goodwill Ambassador. “Thank you for sharing this unforgettable moment with us.”

The online baby shower will allow fans to ‘visit’ the couple’s virtual living room, where they can learn about the issue of child survival and purchase a so-called UNICEF Inspired Gift to help give babies around the world a healthy start to life. The gifts, which can be purchased for as little as $5, are life-saving items that will be distributed to children and communities in some of the poorest corners of the globe.

A $5 gift can buy a mosquito net to ensure a sleeping child stays safe from malaria, one of the leading causes of child death worldwide, according to the UN agency. Other gifts include 17 polio vaccines for $10 that will protect children from contracting the incurable infection, baby-weighing scales to monitor growth in the first critical years of life, and therapeutic food, which consists of a peanut-based paste that can save an acutely malnourished child.

“Every expectant parent around the world shares all the same hopes and dreams for their children that we do,” Shakira said in a UNICEF news release. “Yet many don’t share the same opportunities. Together we know we can change that.”

According to UNICEF figures, some 19,000 children under the age of five still die every day from largely preventable causes. While under-five mortality has dropped from nearly 12 million in 1990 to less than 6.9 million in 2011, much more remains to be done, the agency said in the news release.

Social media fans who participate in the virtual baby shower will be welcomed by a personal video message from Shakira and Mr. Piqué. After purchasing a UNICEF Inspired Gift, they will receive a personal thank you message from the couple. Additionally, the website’s photo gallery includes recent photos of the couple that, until now, had not been shared publicly.