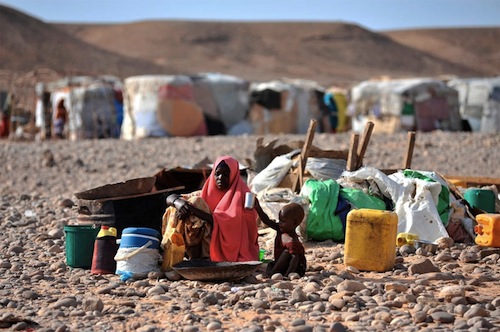 In spite of the progress made one year after the declaration of famine in parts of southern Somalia, some 3.8 million people there are still in need of assistance, the United Nations said yesterday, appealing to countries to provide funding for humanitarian aid.

“Last year, we were able to halt the downward spiral into starvation for hundreds of thousands of people. Famine conditions have not been present since January,” said the UN Resident and Humanitarian Coordinator for Somalia, Mark Bowden, in a news release.

“However, the humanitarian situation in Somalia remains critical with 2.51 million people in urgent need of aid and a further 1.29 million at risk of sliding back into crisis,” he added.

On 20 July 2011, famine was declared in southern Bakool and Lower Shabelle, after the regions were hit by one of the worst droughts in decades. A month later, the famine spread to four more regions in the country, including the capital, Mogadishu.

The six-month crisis caused thousands of deaths and required a massive humanitarian aid programme, before the famine was declared officially over on 2 February 2012. According to the UN Office for the Coordination of Humanitarian Affairs (OCHA), famine is declared when acute malnutrition rates among children exceed 30 per cent, more than two people per every 10,000 die per day, and people are not able to access food and other basic necessities.

The humanitarian situation was complicated by the broader context on the ground. The militant group known as the Al-Shabaab has denied direct access, for a range of international humanitarian organizations, to those people most in need in parts of the country under its control. The Al-Shabaab has been engaged in warfare with Somalia’s military and the UN-backed African Union Mission in Somalia (AMISOM) over territory.

Bowden said there had been progress largely on the humanitarian front due to the exceptional harvest at the beginning of the year and innovative approaches to food security, which address changes in world food prices and obstacles to access people.

However, he noted, the progress made since last year could easily slip backwards if high levels of assistance are not sustained.

“Humanitarian actors need funds to provide the most vulnerable Somalis with urgently needed assistance, such as food, clean water, sanitation facilities and medical care,” Bowden said. “These funds are also needed to build sustainable livelihoods for people who have few or no resources after years of drought and conflict, thereby increasing their resilience to future crises.”

Also today, the Food and Agriculture Organization (FAO) stressed that the situation in Somalia remains critical as reduced rains this year will lead to a below-average to poor harvest in many parts of the south.

“Continued humanitarian support is of utmost importance,” said FAO’s Head of Operations in Somalia, Luca Alinovi, adding that there is also a need to build social safety nets to protect the most vulnerable if and when drought hits again in the future.

FAO has been helping farmers and herders build long-term resilience not just through the immediate provision of cash but also by providing improved seeds and fertilizers, as well as vaccinations for livestock to increase production.

For its part, the UN Children’s Fund (UNICEF) said today that it has been working on long-term interventions to build resilience and address the needs of the most vulnerable, including nearly one million children who have been treated for malnutrition across the Horn of Africa.

“Traditional coping mechanisms are being stretched to the limit for many communities,” said UNICEF’s Regional Director for Eastern and Southern Africa, Elhadj As Sy. “We need to preserve our hard-won gains, and invest in children today to prevent similar crises from happening again in the future.”

UN agencies and humanitarian non-governmental organizations are urging donors to provide $576 million to address the population’s needs over the next six months. According to OCHA, the revised appeal for the entire year is $1.16 billion, half of which has been received.