Study shows there are over 1.3 million child labourers in Yemen 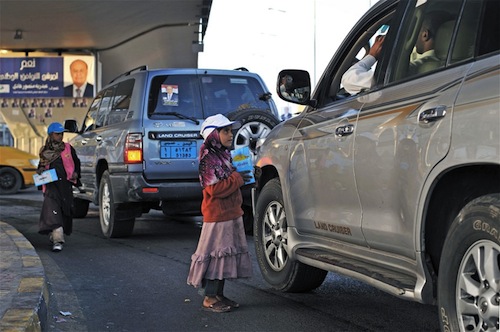 More than one million children in Yemen are involved in child labour, according to a United Nations study released today, which calls for the Middle Eastern country to protect its youth and abide by international standards to ensure they are not deprived of their rights.

Yemen’s first national child labour survey – which was carried out with the support of the UN International Labour Organization (ILO), the UN Children’s Fund (UNICEF) and the Social Development Fund – revealed that of the country’s 7.7 million children in the 5-17 age group, 17 per cent are working, with many performing unpaid work.

“The survey reveals the alarming extent to which Yemeni children are deprived of their rights,” said ILO’s Regional Director for the Arab States, Nada al-Nashif. “The protection of Yemen’s children must be a priority for the international community. Yemen’s development depends on it.”

Child labourers are defined by the study as “anyone under the age of 14 who is employed, and those in the 14-17 age group who work more than 30 hours a week, or are involved in any designated hazardous economic activities and occupations.”

In addition to the 1.3 million child labourers, the report finds that more than 300,000 children aged 14 to 17 work in conditions and activities considered unsuitable for their age.

The report goes on to state that working children and child labourers are far more likely than others to skip or drop out of school. It also stresses that widespread poverty, population pressure, political instability and limited opportunities for employment outside agriculture have a significant impact in their livelihoods.

In a news release, ILO noted that Yemen has ratified its two key conventions on child labour accepting that 14 is the minimum age for employment, and recognizing that children under the age of 18 cannot be employed in hazardous work.

While a majority of countries have adopted legislation to prohibit or place severe restrictions on the employment and work of children, conventions on child labour continues to exist on a massive scale, sometimes in appalling conditions, particularly in the developing world, the agency added.