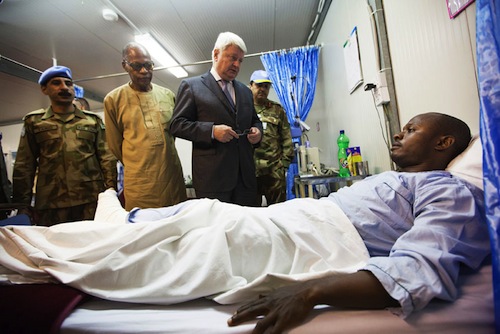 Wrapping up a visit to Sudan, the top United Nations peacekeeping official has urged all parties to try and defuse the intensified conflict in Darfur which is impacting families living in the region, as well as the “blue helmets” mandated to protect civilians and support peace efforts.

“We have witnessed deterioration in the security situation. More people have been displaced—over 300,000 since the beginning of this year—due mostly to tribal clashes,” Under-Secretary-General for Peacekeeping Operations, Hervé Ladsous told journalist in the Sudanese capital, Khartoum, on 4 July.

Earlier, he had met with President Omar Al-Bashir and other senior officials to discuss the ongoing peace efforts.

Ladsous reiterated the UN’s support for the Doha Document for Peace in Darfur and urged the Government and the non-signatory movements to cease hostilities and “enter into negotiation immediately.”

The Doha accord, or DDPD, negotiated with the support of the Government of Qatar, forms the basis for a permanent ceasefire and comprehensive peace agreement to end the fighting that began in Darfur 10 years ago, pitting Government forces and allied militia against rebel groups.

The Sudanese Government and two major rebel groups have committed to the DDPD. The Liberation and Justice Movement (LJM) signed on last year; the Justice and Equality Movement (JEM) signed a framework agreement in January 2013.

During a media conference, Ladsous also condemned an attack on the UN near Labado, East Darfur. Three “blue helmets” were injured on 3 July when an unidentified armed group ambushed a joint African Union-United Nations Mission in Darfur (UNAMID) convoy.

“Attacks on peacekeepers are a crime,” he stressed, noting the peacekeeper’s robust response to the attack and calling for those responsible to be apprehended and prosecuted.

In violation of international humanitarian law, a UNAMID ambulance was also fired upon during the attack.

Ladsous visited the injured peacekeepers this morning at a Mission hospital in Nyala, southern Darfur.

During his three-day visit, Ladsous met with the Governor and other members of local government in El Daein, East Darfur state, as well as leaders of the Native Administration and civil society, and internally displaced people at the Neem camp.

Regarding relations between Sudan and South Sudan, Ladsous called on the Governments of both countries to fully implement the 27 September 2012 Agreements and resolve all disputes through the bilateral mechanisms provided for in these accords.

The agreements – signed in Addis Ababa, the Ethiopian capital, under the auspices of the African Union High-Level Implementation Panel – includes provisions on security, the common border and economic relations aimed at enabling the two nations to fulfil their obligations under a so-called roadmap for easing tensions, facilitating the resumption of negotiations on post-secession relations and normalizing the relations between the two countries.

In meetings, Ladsous also expressed concern over the security and humanitarian situation in Southern Kordofan and Blue Nile states.

The visit to Sudan is part of Ladsous’ wider tour in Africa which included stops in Mali where UN peacekeeping troops known as the African-led International Support Mission to Mali (AFISMA) have taken over security duties. Ladsous heads next to South Sudan.