Posted on: October 7th, 2012 by Julie Jalloul No Comments

Swedish ship on its way to break Gaza blockade 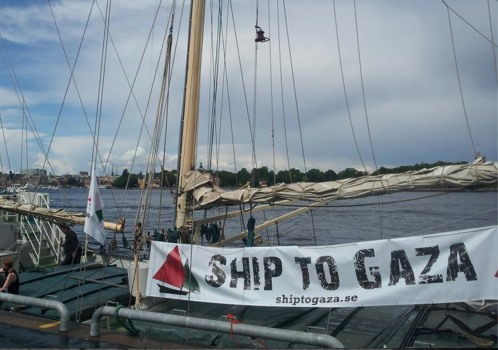 Estelle, a Swedish owned ship sailing under a Finnish flag carrying tons of aid supplies has left from Italy to attempt to break Israel’s naval blockade of Gaza.

The Estelle, carrying 17 activists  including Canadian, Norwegian and Swedish nationals left from the port at Naples, Italy on Saturday. The vessel, which measures 173 feet long, reportedly is carrying humanitarian goods.

The leader of the Norwegian section of the group “Ship to Gaza,” Torstein Dahle, told Reuters that the groups’ goals were the same as that of previous flotillas, namely to end the blockade and bring relief to the people of Gaza.

It will take about two weeks to reach Gaza’s territorial waters, according to AFP.

The ship is part of the “Freedom Flotilla” movement. The movement’s first attempt to break the blockade ended in the deaths of nine Turkish activists after Israeli Navy commandos on May 31, 2010 boarded the Mavi Marmara in international waters of the Mediterranean Sea.

The Estelle began its journey in Sweden and toured Europe, including Finland, Spain, and France before arriving last week in the Gulf of Naples.

A second attempt to break the blockade last summer with a coalition of ships setting sail from Athens failed after Greek authorities intercepted the boats, banning their departure.

In November last year, the Israeli navy also intercepted two Irish and Canadian ships  that were trying to breach the blockade in international waters off Gaza.