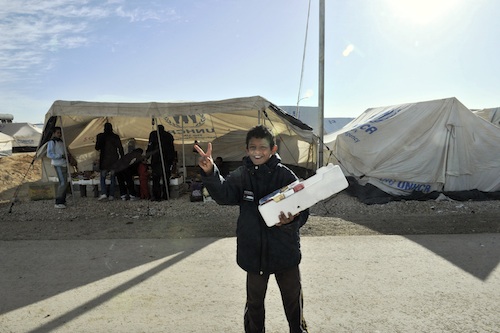 A peaceful activist who had been helping local committees deliver aid died in detention in Syria on February 16, 2013. A second detainee died in detention in November, a released detainee recently told his family. The reported deaths highlight the urgent need for the UN Security Council to require the authorities in Syria to grant international monitors immediate and unhindered access to all detention facilities, according to Human Rights Watch.

“Aziz’s death, and Ghazzoul’s feared death are yet another reminder of the need to immediately lift the veil of secrecy over Syria’s prisons,” said Sarah Leah Whitson Middle East director at Human Rights Watch. “How many more deaths in custody before the Security Council requires Syria to open up its detention centers?”

Human Rights Watch also expressed concern about the well-being of other activists, on the basis of evidence from fellow detainees and relatives, and the fact that in some cases they have been held by security forces incommunicado for months. Many of those being held are feared to have been subjected to torture.

They include Mazen Darwish, president of the Syrian Center for Media and Freedom of Expression (SCM), who was detained by the same Mezze branch of Air Force intelligence on February 16, 2012; Bassel Khartabil (also known as Bassel Safadi),a Syrian-Palestinian software engineer active in developing open source programs for accessible internet, detained by Military Intelligence on March 15, 2012; and Khalil Maatouk a prominent human rights lawyer abducted on October 12 while driving to his office, and believed to be in the custody of State Security in Kafr Suseh, Damascus.

A relative of Aziz told Human Rights Watch that on February 16 he was transported from ‘Adra Central Prison to the Harasta military hospital in the Damascus suburbs where he died. The cause of death was heart complications caused by high blood pressure, from which Aziz suffered before he was detained, and for which he was taking medication.

However, a witness who saw Aziz in ‘Adra, said that his physical condition had deteriorated significantly since Air Force Intelligence arrested him at his home on November 20. Air Force Intelligence held Aziz incommunicado at their facility in Mezze, Damascus until February 12, when they transferred him to ‘Adra.

The witness said that Aziz was incredibly thin, having lost more than 30 pounds, and that Aziz had said that while he was held in the Air Force Intelligence facility, he had suffered severe ill treatment, including being kept incommunicado in a 4-by-4-meter cell with 85 other people without adequate room to sleep, subjected to cold temperatures, fed poor quality and insufficient food, and told that his family was being detained with him. Aziz told the witness that he had not been physically tortured, and that he had been seen by a doctor and regularly given his blood pressure medication. Aziz’s relative told Human Rights Watch that the family learned he had died on February 16 from one of his co-detainees in ‘Adra. The detainee told them that Aziz was transported to the Harasta military hospital at 1:00 a.m. that morning. Hospital personnel told Aziz’s family that he died shortly after arrival. No representative of the Syrian government contacted Aziz’s family to inform them that he died in custody. Instead, relatives visited Harasta military hospital and searched for Aziz before confirming that he was dead.

Aziz, a 64-year-old husband and father of three, moved back to Syria in 2011 from Riyadh, Saudi Arabia, where he was working for a computer company. A relative told Human Rights Watch that after the uprising began, in March 2011, Aziz began working with an informal group of activists to deliver humanitarian assistance to the Damascus suburbs. He was detained at his home on November 20 by armed Air Force Intelligence agents wearing civilian clothing.

A recently released inmate told Ghazzoul’s family that he saw him die in the Military Intelligence branch 215 facility in Kafr Suseh, Damascus, on November 9. The inmate said the death was from wounds sustained on November 5, when Ghazzoul was detained and beaten by members of the National Students Union (NSU), a pro-government student body, and two shabiha who were transporting him to the Military Intelligence detention facility. Despite repeated requests for information from his family, the Syrian government failed to provide any information about Ghazzoul’s well-being or whereabouts.

The government should provide immediate and unhindered access for recognized international detention monitors to all detention facilities, official and unofficial, without prior notification, Human Rights Watch said. These monitors include the office of the Joint Special Representative of the UN and the League of Arab States, Lakhdar Brahimi and the UN Commission of Inquiry (COI) on Syria. The Joint Special Representative’s Office and the COI should deploy professional human rights monitors who are trained to organize random and regular visits to all places of detention, including suspected secret detention centers. These experts should have the capabilities and resources to identify people who are arbitrarily detained, and those who may be suffering from ill-treatment, protect interviewees from retaliation, and ensure the confidentiality and safekeeping of interviews.

“A constellation of abuse surrounds each incident of arbitrary detention in Syria, from the government’s unwillingness to even acknowledge who is in their custody, to widespread torture and chilling reports of deaths in detention.” Whitson said. “The international community, and first and foremost Syria’s allies, needs to bring pressure to bear on the government to stop these rampant abuses.”