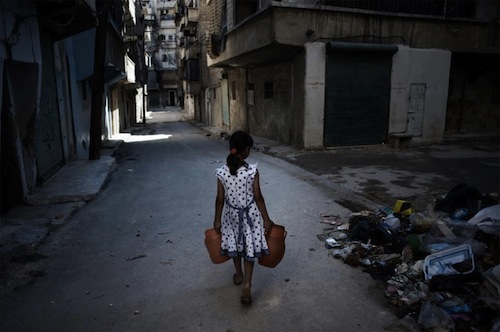 A large-scale operation is under way in Syria to secure safe water supplies for more than 10 million people – close to half the population, the United Nations Children’s Fund (UNICEF) said, amid reports that the quality and quantity of water is continuing to deteriorate with negative impacts for children’s health.

“This shipment is very timely as supplies of chlorine in Syria have fallen dangerously low, making access to safe water challenging for many families,” said Youssouf Abdel-Jelil, UNICEF Representative in Syria.

“This puts the population – and children especially – at high risk of contracting diarrhoea and other water-borne diseases.”

Over the coming weeks, UNICEF, in coordination with the technical department of the Ministry of Water Resources and the Syrian Aran Red Crescent, will deliver 1,000 tons of chlorine to cities and communities across all 14 governorates in Syria.

Meanwhile, the World Health Organization (WHO) has co-signed an agreement with Saudi Arabia to provide $2.1 million worth of essential medicines, vaccines and medical equipment. As many as three million Syrians will benefit from the donation, which will cover a one-year period starting this month.

A shortage of medicines in Syria is becoming more critical, as is waste management and the availability of safe drinking water, WHO has said. Poor hygiene is increasing the risk of infectious diseases such as lice, hepatitis A and leishmaniasis, a sore-causing disease transmitted by sandflies.

More than 60,000 people, mostly civilians, have been killed since the uprising against President Bashar al-Assad began in early 2011. Recent months have witnessed an escalation in the conflict, which has also left more than four million people in need of humanitarian assistance.

The international community has committed more than $1.5 billion for humanitarian aid to Syrians. Supporting reconstruction of critical infrastructure, such as water pumping stations, and providing essential relief supplies like medicines are among the top four priorities inside the country, along with helping people who have fled their homes and the communities hosting them and helping the poorest avoid total destitution.