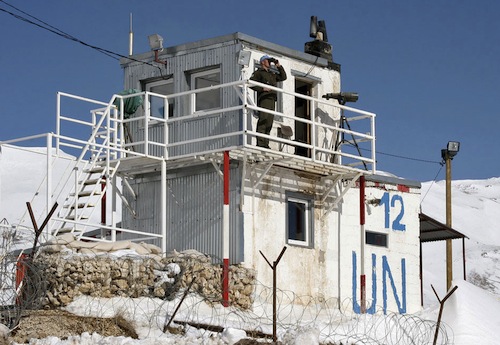 The United Nations Security Council said it was gravely concerned at the presence of the Syrian and opposition troops inside the demilitarized area of the Golan Heights that peacekeepers have been monitoring since 1974, calling on both sides to respect the blue helmets’ freedom of movement and security.

UN peacekeepers are in the area to monitor the 1974 disengagement accord agreed upon by Syria and Israel after their 1973 war.

“The members of the Security Council expressed their deep concern at the risk that all military activities in the area of separation conducted by any actor pose to the long-held ceasefire and the local population,” according to a statement read out by Ambassador Vitaly Churkin of Russia, which holds the rotating Council presidency for the month of March.

Churkin said that the 15-member Council “also underscored the increased risk the situation poses to United Nations personnel on the ground” including the firing on UN personnel and facilities, carjacking of UN vehicles and the detention of the 21 military personnel from the UN Disengagement Observer Force (UNDOF).

The Council noted that the Government of Syria has the primary responsibility for safety and security of UNDOF’s personnel and called on all parties to respect UNDOF’s privileges and immunities and “to ensure the security of and unhindered and immediate access for United Nations personnel carrying out their mandate.”

The statement comes one day after Under-Secretary-General for Peacekeeping Operations Hervé Ladsous briefed the Council on the security risks and operational challenges facing UNDOF. He told journalists after the closed-door session that UN peacekeepers reduced their activities in response to the presence of armed groups from the Syrian conflict and have taken additional security measures, which include the use of more armoured vehicles.

In that context, the Council welcomed the provision of “additional security upgrades and equipment.” Council members also urged UNDOF to consider the temporary use of alternative ports of entry and departure to ensure safe personnel rotation.