Posted on: January 10th, 2012 by Julie Jalloul No Comments

Syria: Where the mobile is mightier than the gun 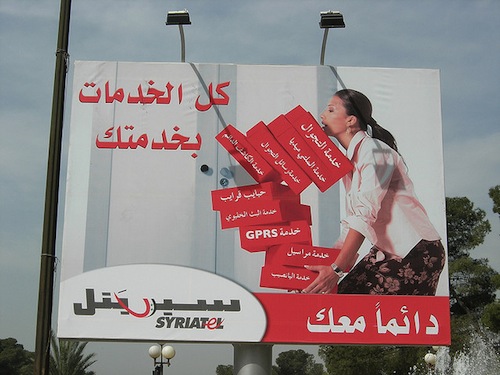 An authoritarian regime, brutal security forces and limited freedom of press: Unlike the other current Middle East revolutions, the uprising in Syria has faced really challenging odds from its very beginning. This was the revolution that analysts predicted would not last as President Bashar al-Assad’s forces were too powerful to resist. A revolution where its authorities have ensured it won’t be televised by banning most international media. But what is happening in a country where hardly any journalists are present?

As the government continues to ban many forms of social media and foreign reporters from entering Syria, the people of Syria still find ways to get their stories out. The mobile phone has proven highly effective in fueling the Syrian uprising. In a repressive country like Syria, cell phones can enable protesters to communicate, rally support for uprisings and film events of the revolution making its users what are often referred to as citizen journalists.

Many still remember the 1982 Hama massacre, when there was no such a thing as citizen journalism and social media networks, the government killed 10.000-40,000 according to Amnesty international in a few weeks. It also managed to hide the massacre from the world for a long period of time.

But this is no longer possible. It’s been almost ten months since the “Arab Spring” fever hit Syria and the same government is reported to have killed more than 5,250 people, a number far lower than the 1982 death toll. They carried forward the rallying cry into Syria last March, using mobiles to document their own protests and inspire an ever-growing number of Syrians to join the movement. In Syria’s case the mobile might indeed be mightier than the gun; only the process seems bloodier.

Through the use of mobile phones Syrians have risked their lives to film crackdowns on protesters by the government’s armed and security forces. The images of tortured and mutilated bodies have undoubtedly made their contribution in heavily censored Syria as they provide some of the only images of the struggle there. These videos are uploaded on websites such as Facebook and YouTube to keep the world informed of events during this difficult time in many parts of the country. In fact, according to a study conducted by the World Bank mobile phones appear as the most predominant and most rapidly growing form of communication in developing economies throughout the world. This is mainly due to its vast network, its ubiquity and to inexpensive mobile service in emerging countries.

And while smartphones like the iPhone may be another hot topic, they are out of the economic reach of most due to their high cost. The Syrian opposition has launched an iPhone app called Souria Wa Bas which roughly translates to Syria and that’s all to disseminate news and information according to Mobile online Portal. This application broadcasts breaking news, videos, photos and even jokes about the incumbent regime. This application is not likely meant to reach only the people in Syria but also people abroad. Shortly after this application was released, the German Association Press reported that the Syrian government had banned the use and import of iPhones in Syria.

Mobile technology is providing opposition groups a unique and unprecedented opportunity to disseminate news and propaganda about their cause, something that previously would have been crushed by government censors.