Posted on: May 3rd, 2012 by AlYunaniya Staff No Comments 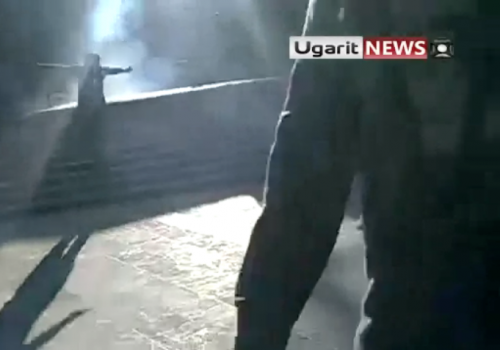 Violent crackdown persists in Syria as activists say security forces have stormed student dorms at a university in northwestern Syria following anti-government protests there, killing at least four students and wounding several others.

More than 50 students have been arrested,according to AP, citing the Local Coordination Committees.

According to the Syrian Revolution official page on facebook, more than 2000 security forces and pro-regime armed men have stormed the university.

Meanwhile, Lieberman US senator voiced his support for the Syrian opposition Wednesday, following meetings with top Lebanese officials and a visit to Syrian refugees in northern Lebanon.

Lieberman visited the northern Lebanese region of Wadi Khaled escoted by the Lebanese army, which is located near the Syrian border and houses the majority of an estimated 24,000 Syrians who have sought refuge in Lebanon, according to AFP.

Most independent media are barred from Syria or have their movements restricted, making it hard to verify such reports.Lebanon needs to help the Syrian opposition and offer further assistance to refugees fleeing unrest in their home country, U.S. Senator Joseph Lieberman, who is on an official visit to Lebanon along with U.S. official Jeffrey Feltman, said Wednesday.

Lieberman also expressed concern that countries in the region and around the world were not doing enough to back the Syrian opposition.

New York-based Human Rights Watch (HRW) condemned and accused Syrian government forces killed at least 95 civilians and burned or destroyed hundreds of houses during a two-week offensive in northern Idlib governorate shortly before the ceasefire, Human Rights Watch said in a report released Wednesday. The attacks happened in late March and early April, as United Nations special envoy Kofi Annan was negotiating with the Syrian government to end the fighting.