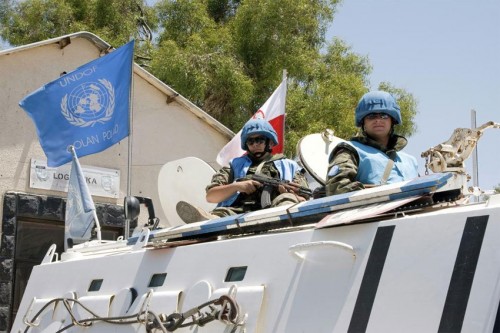 Syrian rebels freed 21 UN peacekeepers on Saturday and handed them over to Jordanian authorities after holding them hostage for four days.

Syrian rebels initially said they would only release the hostages once Syrian troops withdrew from the area. However, rebels eventually dropped their demand and began negotiations with U.N. officials to free the peacekeepers.

On Friday, a U.N. team tried to free the hostages, but was unable due to heavy regime shelling of the area.

The UN estimates that the Syrian conflict has claimed more than 70,000 lives and forced millions from their homes.

Israel seized the Golan Heights during the 1967 Six-Day War. UN peacekeepers have been monitoring the armistice line that followed the 1973 Arab-Israeli war, in which Syria tried to recapture the territory.

Earlier, Israel warned that it will not “stand idle” as Syria’s civil war spills over into the Golan region.