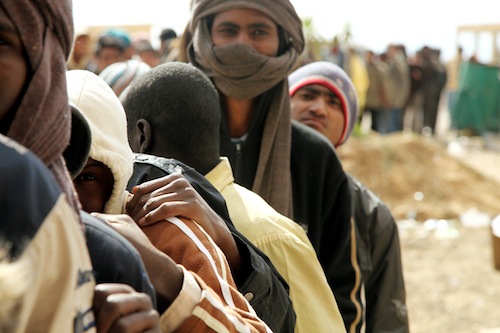 Three days of clashes between rival militias in the southern Libyan town of Sebha, have killed more than 70 people and left more than 150 wounded, a Libyan government spokesman said.

Clashes erupted on Sunday between former rebel fighters from Sebha, Libya’s fourth largest city, and gunmen from the Tibu tribe after a Sebha man was killed in a argument over a car, according to al Arabiya.

A truce was agreed on Wednesday, but reports of fighting emerged later in the day.

The clashes stress the problems the government faces in imposing its authority following the ouster of Muammar Gaddafi last year.

Abdelmajid Seif al-Nasser, a local official who said he had quit his post on the ruling National Transitional Council (NTC) in protest at the violence, told AFP news agency: “There are still clashes in Sabha but not as intense.”

Some African tribes in southern Libya, such as the Toubou, feel they are discriminated against by Arabs from the coastal cities of the north who tend to dominate the country’s government and security forces, according to BBC. Other Libyans blame the Toubou of involvement in the smuggling of illegal migrants trying to get to Europe through Libyan ports.

The Toubou are black oasis farmers by custom who also have connections beyond Libya’s borders. They live in southern Libya, northern Chad and in Niger, and have previously denied having nationalist ambitions.

The EU is concerned about reports of clashes in Sebha, and calls for restraint from all who are involved in the conflict in a statement by Catherine Ashton, EU high representative. The EU underlined its support for all efforts aimed at national reconciliation and for the process of democratic transition in Libya.