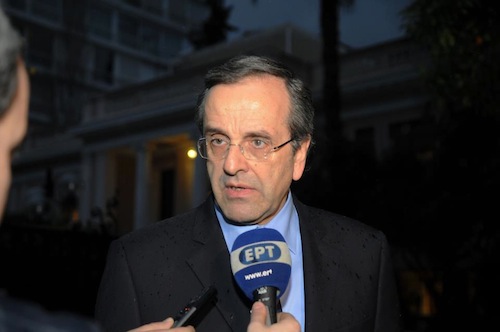 Troika representatives are expected to stay in Athens until the end of the week to continue negotiations with Greek ministers over the evaluation of the country’s loan agreement programme.

After a meeting yesterday between Finance Minister Yannis Stournaras and the troika representatives, government sources told media that all fronts of negotiations remain open. “Today we did not reach any conclusions; both sides are still evaluating actions,” a Finance Ministry official said yesterday.

Troika representatives meet today with Administrative Reform minister Antonis Manitakis in an effort to bridge differences as regards layoffs and the labour reserve scheme in the public sector.

Troika representatives are expected to have their final meeting with the Prime Minister sometime tomorrow.

Government sources said that it was hoped negotiations would come to a conclusion before Prime Minister Antonis Samaras leaves for the European Summit meeting of heads of state, scheduled in Brussels on March 14 and 15, protothema.gr writes.

Prime Minister Antonis Samaras on Saturday promised that there would be “no more austeritymeasures” as the troika continues auditing government’s reform effort.

“And as soon as growth sets in, relief measures will slowly begin,” Samaras said to ND party’s political committee.

He noted that Greece’s ailing economy was “out of intensive care, not out of the hospital.”

“Today our homeland is fighting a battle, fighting a battle so that the country can overcome a crisis that is without precedent in recent decades. We are waging this fight with good omens. We will emerge from the crisis and give optimism and a smile to the young people,” Samaras stressed.

According to AMNA, referring to coalition government record so far, the Premier said: “We kept two fundamental pre-election pledges: we kept the country in the euro and managed to change the loan agreement, reducing the debt and obtaining an extension in the period of adjustment. We succeeded in getting the biggest restructuring of debt ever carried out. At the same time, we restored Greece’s credibility abroad and strengthened unity at home.”

Meanwhile, an estimated 1,000 so-called “Indignants” gathered in Syntagma Square yesterday to protest the government’s austerity measures. They were greeted by dozens of riot police, who made use of tear gas and arrested at least one protester, Kathimerini informs.