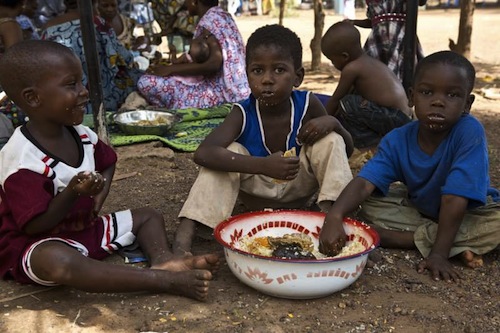 Two-thirds of the people killed or injured by leftover ammunition or explosive devices in central and northern Mali are children, the United Nations Children’s Fund (UNICEF) said, warning that the risk will increase when more displaced families try to return home.

Since April 2012, 60 victims of explosive remnants of war have been reported – 53 people injured, including 38 children and 15 adults, and 7 people killed, including 5 children and 2 adults, UNICEF said in a press release.

“The danger is now at every corner in communities from central and northern Mali where heavy fighting took place,” said Françoise Ackermans, UNICEF Representative in Mali.

“Explosions can happen anywhere and anytime – when children are on their way to school or when a woman goes to the market. Our teams on the ground report charred remains of war vehicles and a lot of abandoned ammunition.”

Nineteen-year-old Amadou lost a finger on his left hand when he threw a stone on an apparent toy children were playing with in his courtyard. “When I woke up, there was blood everywhere. My two brothers, 4 and 16, were injured. My niece died. She was only 18 months old. I feel sad and guilty.”

To better inform civilians about the dangers of potential explosives, UNICEF-supported partners have held public events over the past five months in schools, markets and workplaces that have raised the awareness of an estimated 27,000 people.

The agency has used national and community-based radio stations to disseminate life-saving messages in five languages, and produced posters and other materials using Malian artists.

“We are not always with adults,” said 13-year-old Adidiatou, after attending a UNICEF-sponsored educational session. “If children don’t know, they may pick up a grenade or another explosive thing as if it was a toy. They may not realize it can hurt.”

Unexploded ordinance – including unexploded and abandoned ammunition such as artillery shells, mortars, rockets, grenades, bullets and aircraft bombs – is believed to be linked to the recent armed conflict. There is also historic landmine contamination closer to the border with Algeria predating the recent French intervention, according to the UN Mine Action Service (UNMAS).

Fighting between Government forces and Tuareg rebels broke out in northern Mali last January, after which radical Islamists seized control of the area. The conflict uprooted thousands of people and prompted the Malian Government to request military assistance from France to stop the progression of extremist groups.