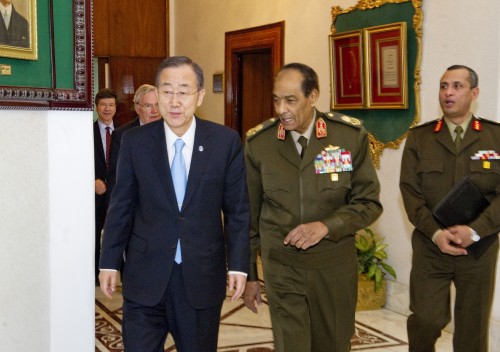 The Pentagon which manges the military relations between the two countries has expressed concerns over moves by Egypt’s ruling generals to stay in power despite a presidential vote while it urged the Egyptian military to relinquish power to civilian-elected authorities and to respect the universal rights of the Egyptian people and the rule of law.

The military power grab poses a dilemma for the  Obama administration, which publicly backed the revolution that ousted longtime leader Hosni Mubarak last year but also sees the Egyptian army as a crucial regional security partner, according to Al Jazeera.

The Brotherhood has called on people to demonstrate against what it says is a “military coup” by the ruling generals, as the country awaits the final tally from the election expected to come out on June 21. All of the results announced on Sunday night are unofficial.

But shortly before the final result of the elections the generals who run the country stirred controversy by issuing new rules in a constitutional declaration demonstrating the president’s powers that made clear power remains within the hands of the army.

According to a decree issued on Sunday night, the military council will hold authority over the budget and the legislative process until a new parliament is elected, according to Al Arabiya.

The decree also limits the new president’s powers who can only declare war if approved by the military council.

Sameh Ashour, the head of SCAF’s advisory council, said the incoming president would probably have a short term, and would be replaced after a new constitution was drafted, according to Al Jazeera.