Posted on: May 14th, 2012 by AlYunaniya Staff No Comments 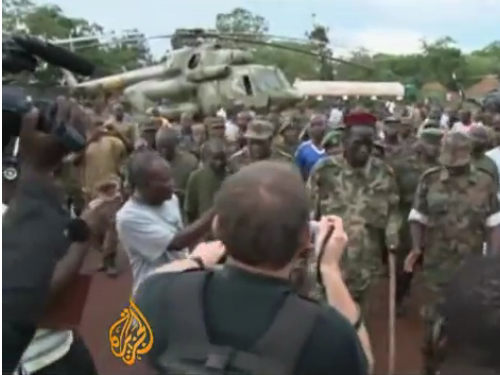 The Ugandan army has captured a senior Lord’s Resistance Army (LRA) commander and close ally of fugitive leader accused of war crimes, Joseph Kony, bringing it one step closer to his capture.

Caesar Achellam, the LRA’s military strategist and one of the most wanted top five officials of LRA, was captured on Saturday after a firefight with US-backed Ugandan troops along the River Mbou as he attempted to cross into the Democratic Republic of Congo, according to The Wall Street Journal.

A spokesman for the Uganda People’s Defence Force (UPDF), which has a full-time force hunting for Kony in the Central African Republic’s jungles backed by with other African nations and US special forces, told Reuters that Achellam’s capture would encourage other fighters to abandon the LRA.

“The arrest of Major General Caesar Achellam is big progress because he is a big fish. His capture is definitely going to cause an opinion shift within LRA,” said Felix Kulaigye, UPDF spokesman said.

UPDF said Achellam had been armed with just an AK-47 rifle and eight rounds of ammunition while was being held with his wife, a young daughter and a helper, according to Al Jazeera.

The LRA waged a war against the government in northern Uganda for nearly 20 years before it was thrown out in 2005.

In December 2008, Uganda launched Operation Lightning Thunder, dispersing the rebels and pushing them north into the Central African Republic.

Kony is wanted by the International Criminal Court for rape, mutilation and murder of civilians, as well as recruiting by force children as  sex slaves.