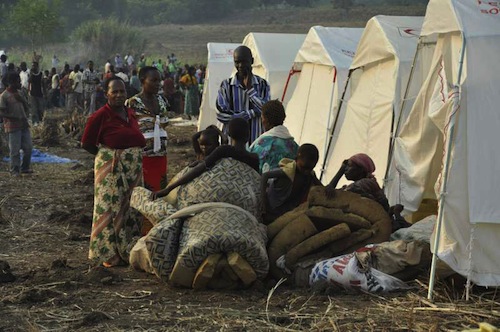 The United Nations refugee agency is ramping up efforts to aid some 15,500 Congolese at an increasingly crowded transit facility in western Uganda which has become a hub for those who fled renewed fighting in the Democratic Republic of the Congo (DRC) and hid in schools across the border.

“UNHCR and government partners are running 15 trucks non-stop all day transferring refugees and their possessions to the facility,” Adrian Edwards, spokesperson for the UN High Commissioner for Refugees (UNHCR), told journalists in Geneva.

The Uganda Red Cross Society, which runs the Bundibugyo transit centre, estimates that more than 66,000 people have fled the fighting last week in DRC’s North Kivu province between government troops and the Allied Democratic Forces, a Ugandan rebel group.UNHCR and government partners are running 15 trucks non-stop all day transferring refugees and their possessions to the facility.

Many walked 15 kilometres to school sites across the border. According to UNHCR, all the refugees have been relocated from four of the schools. Some 5,000 refugees remain at the main site, Butongo Primary School.

One refugee at Butongo, Marinyese Nyota, 35, told UNHCR that she had fled from the North Kivu town of Bayumba last week with her husband and five children. They spent three nights in the bush and then three nights in Butongo. “We ran without anything. When the rebels arrived, no one took anything, not even a hoe, not even bedding, not anything. You are only saving your body to get here.”

The Bundibugyo transit centre to which the refugees are being transported has 229 tents for individual families and 13 large communal shelters. The transit centre has a maximum capacity of 25,000 people, even with a new 4.5-acre land allocation by the Ugandan Government.

Some refugees are setting up their own makeshift homes out of blankets they were given at the site and using mosquito nets they brought with them as “roofing,” Mr. Edwards said.

A sufficient amount of water tanks are arriving to the transit site, but UNHCR expressed concern about water supplies as the number of refugees in the centre grows. In addition, nearly 80 individual pit latrines have been dug.

“Our main worry at the moment is sanitation and hygiene facilities for the refugees,” UNHCR Field Assistant Andrew Lubwama said. He added that if the rains come early, there might be an increased threat of disease outbreaks.

Children between the ages of nine months and 15 years are being vaccinated against measles and receiving Vitamin A supplements and deworming tablets. Medical teams are also identifying sick children and looking out for anyone whose nutrition might have suffered from going a week or more without a proper meal during their flight or stay at the border, Mr. Edwards added.

“The transit centre is intended to be the refugees’ home for no more than three weeks,” he said.

He stressed that while the centre is considered safe, UNHCR and the Government are looking into other possibilities for relocation to places where people could get protection, plots of land to farm for themselves, as well as shelter materials and food rations.

The UN and its partners are also working to get the classrooms that were used for shelter back in shape as soon as possible so that children can resume their studies.

Meanwhile, UNHCR staff said they saw hundreds of refugees returning to eastern DRC, carrying belongings, including ducks and goats. Many other refugees are living with friends and relatives on the Ugandan side. It is not clear how many remain along the border, Mr. Edwards said.

According to the agency, many people prefer to remain close to the border so that it will be easy to check on their homes and crops during daylight hours.

In the hills, they lack access to potable water, proper shelter, security and sufficient food and it is also difficult to access them, UNHCR said.