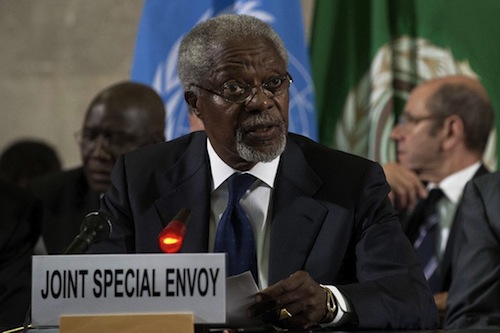 The Joint Special Envoy for the United Nations and the League of Arab States for the Syrian Crisis, Kofi Annan, today highlighted the role that Iran could play in helping resolve the crisis in Syria.

“I think Iran can play a positive role,” the Joint Special Envoy told reporters in the Iranian capital, Tehran, adding, “I believe, as you heard me say on many occasions, that Iran has a role to play. And my presence here explains that I believe in that.”

Annan was addressing the media alongside Iran’s Foreign Minister, Ali Akbar Salehi. The envoy had arrived in Iran on Monday to seek the country’s support and cooperation in his efforts to resolve the conflict in Syria.

In his remarks to the media, the Joint Special Envoy noted that since assuming his functions, he had received encouragement and cooperation from Minister Salehi and the Government of Iran

“And I think the Minister has made it clear that if we do not make a real effort to resolve this issue peacefully, and it were to get out of hand and spread to the region, [it could] lead to consequences that none of us can imagine. So, let’s work together to bring peace and stability to Syria,” Annan said.

Preceding his arrival in Tehran, the Joint Special Envoy had been in Damascus, where he met with President al-Assad, in talks which he earlier described as “very candid and constructive.” He had also said they had agreed on an approach to ending the violence in the Middle Eastern country, and that he would share that approach with the armed opposition.

In response to a question in Tehran on that approach, Annan said that the details had yet to be finalized as the armed opposition in Syria had to be consulted. “I cannot get into specific details. But let me say that it relates to the efforts to end the violence. And he [President al-Assad] made a suggestion of building an approach from the ground up in some of the districts where we have extreme violence – to try and contain the violence in those districts and, step by step, build up and end the violence across the country,” he said. “The details, of course, are to be worked out… but it really deals with ending the violence,” he added.

Later on Tuesday, Joint Special Envoy Annan arrived in Baghdad, Iraq, for talks with Prime Minister Nouri al-Maliki on the Syrian crisis and its impact on the region.

A spokesperson for Mr. Annan said that the meeting with Prime Minister Maliki was “very constructive,” and the Iraqi leader expressed concern for the potential impacts the Syrian crisis could have on neighbouring countries, particularly Iraq, should it not be contained.

The spokesperson added that the Prime Minister expressed his full support for the six-point plan put forward earlier this year by Annan to end the violence in Syria. The plan calls for an end to violence, access for humanitarian agencies to provide relief to those in need, the release of detainees, the start of inclusive political dialogue, and unrestricted access to the country for the international media.