Posted on: May 8th, 2013 by AlYunaniya Staff No Comments 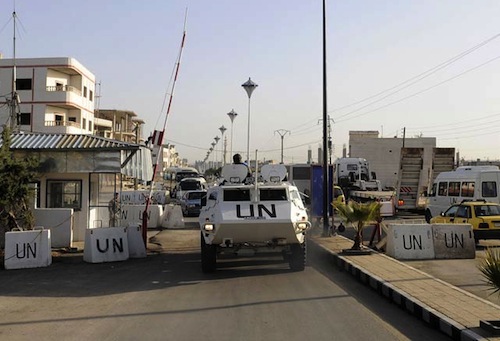 Secretary-General Ban Ki-moon called for the immediate release of four peacekeepers being held by “armed elements” in the Golan Heights.

According to a statement issued by his Spokesman, the Secretary General “strongly condemns the detention of four United Nations Disengagement Observer Force (UNDOF) peacekeepers by armed elements in the vicinity of Al Jamla, in the area of limitation.”

Calling for the peacekeepers’ immediate release, Secretary-General Ban reminded all actors in Syria that UNDOF is mandated to monitor the Disengagement of Forces Agreement between Israel and Syria.

“The Secretary-General calls on all parties to respect UNDOF’s freedom of movement and safety and security,” the statement said.

This latest incident comes nearly two months after 21 UNDOF peacekeepers were captured on 6 March in the same location by armed elements of the Syrian opposition. They were held for fours before being released safely.

In the wake of that incident, the Security Council issued a Presidential Statement on 27 March expressing its “grave concern” at the presence of the Syrian and opposition troops inside the demilitarized area of the Golan Heights, and called on both sides to respect the blue helmets’ freedom of movement and security.

That statement followed a briefing to the Council by Under-Secretary-General for Peacekeeping Operations Hervé Ladsous on the security risks and operational challenges facing UNDOF.

Ladsous told journalists after the closed-door session that UN peacekeepers had reduced their activities in response to the presence of armed groups from the Syrian conflict and have taken additional security measures, including more frequent use of armoured vehicles.