UN calls on UAE to guarantee protection of rights defenders 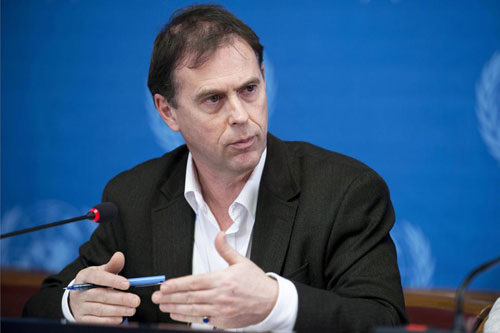 The United Nations today called on the United Arab Emirates (UAE) to provide protection to human rights defenders to ensure they can carry out their work, following reports of various cases of harassment, arbitrary arrests, and expulsion from the country.

“We are concerned about what appears to be an accelerating crackdown on human rights defenders in the United Arab Emirates through harassments, denial of travel, termination of work contracts, arrests, denaturalization and expulsion from the country,” said the spokesperson for the Office of the High Commissioner for Human Rights (OHCHR), Rupert Colville, during a briefing to reporters in Geneva.

“We call on the Government to guarantee that human rights defenders are able to carry out their work without fear of reprisals and urge them to release those who have been detained for peaceful exercise of their fundamental human rights,” he added.

Yesterday, a prominent activist, Ahmed Abdul Khaleq, was deported to Thailand. Abdul Khaleq was found guilty in November along with four other human rights defenders of “publicly insulting” senior officials, but was later pardoned by the President. He was detained once again in May.

Abdul Khaleq met with OHCHR staff in Bangkok, where he reported that he was never told why he was arrested for the second time and was never taken to court. Colville noted that his case is of particular concern because he is a stateless person, making him extremely vulnerable.

In addition, last night, Mohamad Al Roken, another human rights defender and the head of the union of jurists in the UAE, was also detained along with his son and brother-in-law.

“It appears that national security is increasingly being used as a pretext to clamp down on peaceful activism, to stifle calls for constitutional reform and on human rights issues such as statelessness,” Mr. Colville said. “A number of activists openly critical of the Government have been arbitrarily deprived of their Emirati nationality.”

During the briefing, Colville also said the refugee agency is concerned by reports of violent protests over the weekend in the Maldives and the excessive use of force by security forces in response.

“Instances of apparent brutality have been captured on camera. These include the seemingly deliberate and uncalled-for use of some kind of spray on former President Nasheed, and the driving of police vehicles at high speed into crowds of protestors,” the UNHCR spokesperson said, calling for an immediate investigation, and firm action against those responsible for excessive use of force.

In February, the then-President, Mohamed Nasheed, resigned after days of protests and tensions between the Government and military and police. He was succeeded by his former deputy, Mohammed Waheed Hassan.

The Government has since set up a National Commission of Inquiry to probe the events leading to the change, and both the UN and the Commonwealth of Nations have agreed to provide legal advice to the Commission.