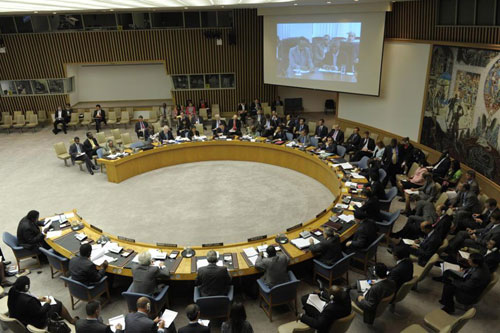 Amidst escalating tensions along the Syrian-Turkish border, United Nations Secretary-General Ban Ki-moon and the world body’s Security Council today called on all concerned to exercise restraint.

At least five Turkish civilians were reportedly killed, and others injured, on Wednesday, after mortar fire from Syria hit the town of Akcakale in Turkey’s Sanliurfa province, which shares a border with Syria. Turkey’s parliament yesterday authorized further military action against Syria, according to media reports.

Mr. Ban has “repeatedly made clear his concern about the spillover of the Syrian crisis into neighbouring countries, as occurred yesterday with Turkey,” said a statement issued by his spokesperson.

“The Secretary-General calls on all concerned to abandon the use of violence, exercise maximum restraint and exert all efforts to move toward a political solution,” it added.

In addition to calling for restraint, expressing their condolences and condemning the shelling “in the strongest terms,” the members of the Security Council underscored that the incident highlighted the grave impact the crisis in Syria has on the security of its neighbours and on regional peace and stability.

“The members of the Council demanded that such violations of international law stop immediately and are not repeated. The members of the Security Council called on the Syrian Government to fully respect the sovereignty and territorial integrity of its neighbours,” Ambassador Gert Rosenthal of Guatemala, which holds the Presidency of the Security Council for the month of October, said in a press statement after a meeting of the 15-member body.

More than 18,000 people, mostly civilians, have died in Syria since the uprising against the regime of President Bashar al-Assad began last year. A further 2.5 million Syrians urgently need humanitarian aid, according to UN estimates.

“As the situation inside Syria deteriorates yet further – including the atrocious terrorist bombings in Aleppo this week which killed dozens of people including civilians – the risks of regional conflict and the threat to international peace and security are also increasing,” Mr. Ban’s spokesperson said in the statement.

Furthermore, he added that the Joint Special Representative for Syria of the UN and the League of Arab States, Lakhdar Brahimi, has been in communication with officials from Turkey and Syria to encourage an easing of tensions.