Posted on: November 14th, 2012 by AlYunaniya Staff No Comments 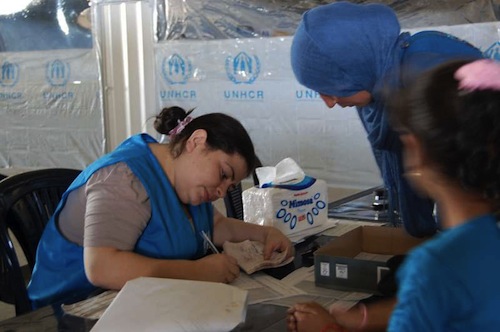 The United Nations refugee agency said that the violence throughout Syria is making the delivery of vital supplies to displaced people increasingly hazardous, while, beyond the Middle Eastern nation’s borders, the number of Syrian refugees continues to climb.

Addressing journalists in Geneva, a spokesperson for the Office of the UN High Commissioner for Refugees (UNHCR), Melissa Fleming, said the agency had delivered aid packages to 59,000 families, thereby helping 295,000 people.

“The emergency packages contain non-food humanitarian supplies ranging from blankets and clothing to cooking kits and jerry cans,” Fleming said. “These are aimed at helping families meet basic needs during the coming winter.”

Fleming also highlighted the rising challenges faced by UNHCR’s 350 Syria-based staffers, who operate from offices in the capital, Damascus, Aleppo in the northwest, and Hassakeh in the northeast.

“Unfortunately, recent deliveries have been very difficult,” Fleming said. “Last week, humanitarian operations were disrupted on at least two days in Damascus because of insecurity,”

She added, “Similar difficulties were experienced by staff working in Aleppo, and we are temporarily withdrawing staff from north-eastern Hassakeh governorate.”

UNHCR aims to provide aid to 500,000 internally displaced Syrians by the end of the year, amid the violence that UN estimates say has killed at least 20,000 people, mostly civilians, since an uprising against President Bashar al-Assad began some 20 months ago, and rendered some 2.5 million people in need of humanitarian assistance.

The refugee agency is also committed to helping Syrian refugees in neighbouring countries, where the number those who are registered or awaiting registry has now reached 407,000, and, said Fleming, “continues to climb.”

Amongst the challenges faced by UNHCR and its partners in Syria is the danger posed by the ongoing violence – hostile actions in recent days have led to the loss of large numbers of blankets destined for Syrians driven from their homes by fighting.

Fleming said 13,000 blankets burned when a mortar shell struck the Syrian Red Crescent-owned warehouse storing them in Aleppo, Syria’s largest city, and the scene of intense fighting over many months.

She added that “unknown people” hijacked a truck carrying another 600 blankets to Adra, a town on the outskirts of Damascus. Despite the challenges and setbacks, Ms. Fleming said “progress has been made.”

“Yesterday, we were able to deliver nearly 5,000 mattresses and 500 hygiene kits to Aleppo, Hassakeh and Adra,” she said. “We also continue with the provision of education materials and cash assistance for families.”

According to Fleming, UNHCR gave individual school kits to 10,500 displaced children in Hassakeh, while almost 12,100 displaced families in a section of Rural Damascus and in Hassakeh Governorate received an allowance of $150 per family.

The UNHCR spokeswoman warned that that current refugee counts would climb as “tens of thousands” of Syrians who’ve fled their homeland present themselves for registration and assistance.

“Many are expected to come forward… in the coming weeks, as winter sets in, and their resources run out,” she said.

New arrivals have crossed the borders into Turkey, Jordan and Iraq, though the influx of displaced Syrians into Lebanon “remains stable,” Fleming noted, adding that work was underway in several refugee camps to improve conditions and prepare for winter.

She highlighted that the arrival of 4,045 new refugees in Jordan last week marked the “highest weekly total” since 1 September for that country. The influx brought the number of refugees registered or awaiting registration in Jordan to more than 116,000, while more than 70 percent were living on the local economy.

Syrian Kurds made up most of the 3,171 new arrivals in Iraq’s northern Kurdistan region in the week before 7 November, Ms. Fleming noted. Some 50,000 Syrian refugees were now in Iraq.

In Lebanon, UNHCR is stepping up its efforts to register refugees, dispatching mobile teams to reach people in remote areas, Ms. Fleming said. A total of 118,633 are now registered, or awaiting registration.

After meeting with political leaders and the Mufti of Tripoli and the North, Sheikh Malek El-Shaar, Mr. Plumbly said in remarks to the media that he “welcomed the recent calm in the city,” but also stressed the responsibility of “all concerned” to avoid a return to violence.

The conflict in Syria recently re-ignited political and sectarian violence in the city, according to media reports.