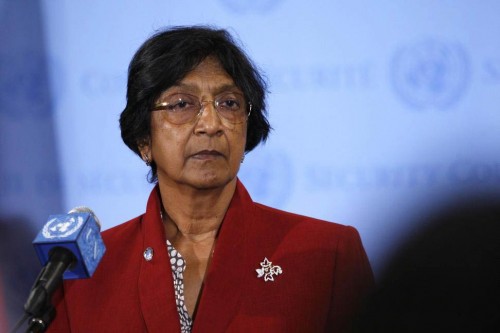 The United Nations human rights chief today renewed her call on the Security Council to refer the situation in Syria to the International Criminal Court (ICC), stressing the need to ensure accountability for the serious abuses committed by both sides in the ongoing conflict.

“In my view, both Government forces and armed opponents have been involved in actions harming civilians,” High Commissioner for Human Rights Navi Pillay told reporters after a closed-door briefing to the Council.

“Those responsible for attacks against civilians must be held accountable, and so I reiterated my call on the Security Council to refer the situation in Syria to the International Criminal Court as I believe that the evidence points to the commission of crimes against humanity,” she stated.

“Ending the conflict is what we all seek,” said Ms. Pillay, whose office (OHCHR) and the Independent Commission of Inquiry on Syria – appointed by the UN Human Rights Council – have documented serious human rights violations by both Government and opposition forces.

The High Commissioner’s briefing comes a day after the Action Group on Syria, which met in Geneva under the auspices of the Joint Special Envoy for the UN and the League of Arab States on Syria, Kofi Annan, agreed on a set of principles and guidelines for a Syrian-led transition that meets the aspirations of the Syrian people.

This includes the establishment of a transitional governing body that would exercise full executive powers and that would be made up by members of the present Government and the opposition and other groups.

The Group also called for all parties to immediately re-commit to a sustained cessation of armed violence, to fully cooperate with the UN Supervision Mission in Syria (UNSMIS), and to implement the six-point plan put forward by Mr. Annan without waiting for the actions of others.

Ms. Pillay stressed that any solution to the conflict must adequately address the root causes of the conflict, namely the human rights grievances.

“I welcome the Action Group’s plan and hope that it will rapidly pave the way for a genuinely democratic and inclusive State with full respect for human rights and the rule of law.”

She also stated that the presence of UNSMIS in the country remains “vital,” and that she urged the Security Council to support and strengthen its mandate to enable it to effectively monitor and report on the human rights situation in Syria.