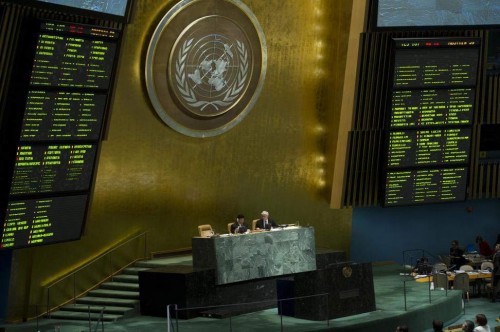 Expressing grave concern at the continuing escalation of violence in Syria, the United Nations General Assembly today adopted a resolution reiterating its call for rapid progress on a political transition, “which represents the best opportunity to resolve the situation […] peacefully.”

Adopted by a vote of 107 in favour to 12 against, with 59 abstentions, the Assembly text expressed the body’s outrage at the “rapidly increasing death toll” in Syria, which the UN estimates to be in the tens of thousands. The resolution also strongly condemns the Syrian Government’s increased use of heavy weapons, and also condemns ongoing “widespread and systematic gross violations of human rights and fundamental freedoms.”

This marks the fifth resolution on the situation in Syria voted by the 193-member body since 2011, when fighting broke out between the Government and opposition forces seeking to oust President Bashar Al-Assad. The current measure welcomes the establishment last year of the National Coalition for Syrian Revolutionary and Opposition Forces “as effective representative interlocutors needed for a political transition.”

The Arab-led resolution requests the international community to provide “urgent” financial support to host countries to enable them to respond to the growing humanitarian needs of Syrian refugees and affected communities. It also requests the UN Special Rapporteur on the human rights of internally displaced persons (IDPs) to submit a report to the Assembly within 90 days “on the very dire situation” of IDPs in the country.

“Over the past 800 days, the conflict has continued to escalate, threatening the establishment of ethnic or sectarian fiefdoms—thus gravely imperilling the sovereignty and territorial integrity of Syria,” said Assembly President Vuk Jeremic ahead of action on the text. “Violence is begetting more violence; hatred, more hatred —carving deeper and deeper wounds into Syria’s society.”

“If we are unable to do anything to stop this tragedy, then how can we sustain the moral credibility of this Organization?” he asked, adding: “It is high time to say ‘enough is enough;’ enough to complacency and enough to fratricide.” He said that evidence of chemical weapons use is now coming to light. “Succumbing to the despondency of the status quo “is a prescription for a disastrous future” of multiplying crises in Syria and the wider Middle East region.”

President Jeremic said that at least 80,000 have perished since the start of the hostilities, most of these casualties believed to be civilians, and that the United Nations refugee agency (UNHCR) has registered more than a million, now living in camps in Jordan, Lebanon, Turkey, Iraq, and beyond. Over four million more people have been internally displaced since the fighting began.

“We should strive to build on the agreement reached by the Action Group for Syria last June in Geneva, and reinvigorated a few days ago in Moscow, to get the political process off the ground, enabling the citizens of Syria to begin reconciliation and freely determine their nation’s future, he said.

Also speaking before the vote, Syrian Ambassador Bashar Ja’Afari expressed his surprise that the resolution was tabled under the Assembly’s agenda item on “prevention of armed conflict” because he believed its content contradicted that purpose. Indeed, it sought to escalate violence by legitimizing the provision of weapons to terrorists in Syria and “by recognizing one faction of the opposition as the Syrian people’s legitimate representative. “

Whenever a political solution looked likely, he said, terrorist activity rose and Member States aborted their efforts to find a political solution. Al-Qaida-linked terrorists were operating in Syria thanks to the “involvement of intelligence agencies of well-known States” and they committed “unprecedented savage crimes” and human rights violations.

Syria had reacted positively to peace initiatives and he stressed his continued commitment to achieving a “Syrian-led comprehensive national dialogue” that would include the opposition. He called on opposition forces that rejected dialogue to adhere to the will of the “great majority of the Syrian people,” which favoured a political solution.

Nearly 30 other delegations took the floor, with some questioning “the motive behind the text – regime change – which has been clear from the start,” while others urged delegations to “look at the resolution honestly; look at the words on the page, which clearly call for a speedy political transition in Syria.”

Still other speakers saw the resolution as “counterproductive” in light of the understanding reached by US Secretary of State John Kerry, and Russian Foreign Minister Sergey Lavrov in Moscow earlier this month to convene a an international meeting on a political transition in Syria. Those urging the Assembly to reject the text said the resolution bestowed authority on the National Coalition which could only be exercised by democratically elected officials.