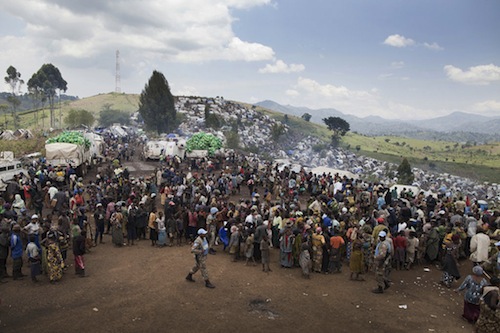 United Nations peacekeepers in the Democratic Republic of the Congo (DRC) have provided protection to some 1,500 civilians after renewed clashes between national forces and an armed group, a spokesperson for the world body said today.

According to the UN peacekeeping mission in the country (MONUSCO), fighting between the DRC armed forces (FARDC) and the Alliance des Patriotes pour un Congo Libre et Souverain (APCLS) on Friday killed some 11 APCLS combatants and injured one FARDC soldier.

Since fighting first began in February, tens of civilians have been killed, including a humanitarian worker, hundreds have been wounded and thousands have been displaced. Thousands who have fled the violence have sought refuge around the UN peacekeeping base in Kitchanga.

MONUSCO said that following the fighting on Friday, the mission has provided protection to about 1,500 civilians.

“The situation is reported to be calm at present but the UN mission continues to monitor the situation and patrol the area,” UN spokesperson Eduardo del Buey told reporters in New York.

MONUSCO is tasked with supporting the Congolese authorities in their stabilization and peace consolidation efforts, including assisting with the holding of elections, the monitoring of human rights violations and support for Government action against armed groups operating in the east of the country.

The UN Security Council last week strengthened MONUSCO’s capacity by authorizing the deployment of an intervention brigade that will carry out targeted offensive operations, with or without the Congolese national army, against armed groups that threaten peace in the eastern part of DRC.