Posted on: April 19th, 2013 by Tina Michalitsis No Comments 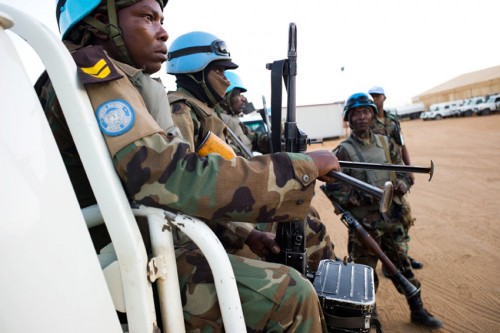 The African Union-United Nations peacekeeping mission in Darfur is working in coordination with the Government of Sudan to find attackers who killed at least one blue helmet earlier today in what is considered a war crime under international law.

“In the early morning hours of 19 April, one peacekeeper of the African Union-United Nations Mission in Darfur (UNAMID) was shot dead and two others injured in an attack by unidentified assailants on the mission’s team site near Muhajeria,” according to a statement from UNAMID.

An estimated 18,000 displaced persons remain concentrated around the Mission’s team sites near the Muhajeria and Labado villages since 6 April, when fighting broke out between the Government forces and the Sudan Liberation Movemenet/Minni Minawi.

The UN has been calling for humanitarian access to assist the groups, who are mostly women and children.

In today’s statement, UNAMID said it was investigating the events surrounding the incident and working in coordination with Government of Sudan to ensure that the perpetrators are brought to justice.

Earlier in the week, Secretary-General Ban Ki-moon spoke about unrelated attacks on peacekeepers in South Sudan where he recalled “that the killing of peacekeepers is a war crime that falls under the jurisdiction of the International Criminal Court,” his spokesperson said.