Posted on: August 3rd, 2012 by AlYunaniya Staff No Comments 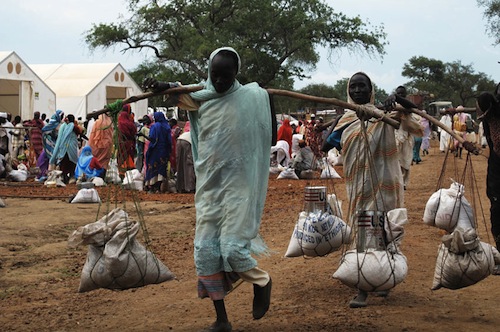 “Our food assistance has been a lifeline to more than 100,000 refugees in Maban County, but continuing that lifesaving support will require some extraordinary measures given the size of the refugee influx into an area with limited infrastructure,” he added.

South Sudan is currently hosting more than 150,000 refugees from Sudan, many of whom have fled conflict and lack of food in their homeland. A large number of these are in Upper Nile State.

To address the lack of infrastructure to deliver aid in South Sudan, WFP has been moving food to the camps on river barges, trucks and helicopters. However, the recent influx of 35,000 refugees into Maban County in the state of Upper Nile has sharply increased the food needs.

The surge in refugees, coupled with the start of the rainy season has made movement of food into the area more challenging, the agency said. It will air drop up to 2,000 metric tons of food into Maban County, to allow vital food distributions for refugees who have fled Sudan’s Blue Nile State. Last month alone, WFP supported some 105,000 refugees in the area, and the air drops will allow assistance to continue uninterrupted.

Meanwhile, health workers have reported alarming levels of malnutrition among children in the Yusuf Batil camp in Upper Nile State, where many new refugees have arrived in a weakened condition and were battling illness. “People in camps have told me how they arrived weak and hungry after weeks of trekking and foraging in the forest before crossing the border,” Nikoi said.

In addition, the agency said it is providing specialized nutritional commodities to all children under five in the Yusuf Batil camp, and will also provide nutritional support to thousands of children in the other refugee settlements to prevent worsening malnutrition.

While WFP’s pre-positioned food stocks will last until September, the agency estimates that more food will be needed in Yida through to the end of the rainy season, when settlements will be inaccessible by road.

The agency has appealed to donors for $6.5 million to fund the air drops in both the Maban and Yida regions.