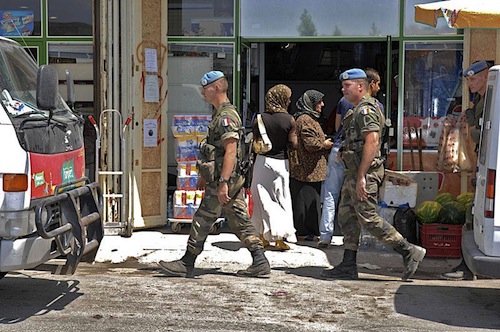 The Security Council encouraged all parties in Lebanon to remain united and resist a “slide into conflict,” amid the multiple challenges to the country’s security and stability, including from the crisis in neighbouring Syria, as well as heightened tensions within.

“As the impact of the Syria crisis on Lebanon’s stability and security becomes more and more apparent, the Security Council underscores its growing concern at the marked increase of cross-border fire from the Syrian Arab Republic into Lebanon, which caused death and injury among the Lebanese population, as well as incursions, abductions and arms trafficking across the Lebanese-Syrian border,” the 15-member body said in a presidential statement.

The Council noted “with deep concern” new developments with regard to the involvement of Lebanese parties in the fighting in Syria, and called on them to recommit to Lebanon’s policy of disassociation, to stand united behind President Michel Sleiman and to step back from any involvement in the Syrian crisis.

In his latest report on the implementation of Security Council resolution 1701, which ended the 2006 war between Israel and the Lebanese group Hizbollah, Secretary-General Ban Ki-moon noted with concern new developments regarding the involvement of Lebanese citizens in the fighting in the Syria.

This includes Hizbollah’s “acknowledged participation in and commitment to such fighting,” threats by external actors to bring their fight to Lebanon in response to Hizbollah’s involvement and calls from inside Lebanon to engage in jihad in Syria, Ban wrote.

“The implications of these developments for Lebanon’s stability, and indeed for the region, are serious,” he warned, urging all concerned parties in Lebanon to step back from involvement in the conflict in Syria.

The Council heard a briefing yesterday on the report, as well as the latest developments on the ground, from the UN Special Coordinator for Lebanon, Derek Plumbly. Both Mr. Plumbly and the Council have strongly condemned the terrorist attack that took place yesterday in a Beirut suburb and injured around 50 people, and underlined the need to bring the perpetrators to justice.

“In the face of attempts to undermine the country’s stability,” the Council today encouraged all parties in Lebanon to demonstrate renewed unity and determination to resist a “slide into conflict” and commended Sleiman’s continued efforts in this regard.

The Council also condemned recent violence by armed groups across Lebanon, and stressed the need to support the security and judicial authorities in combating impunity.

Both the Council and the Secretary-General called on Lebanon’s leaders to work with Prime Minister Tammam Salam to finalize the formation of a Government, which is crucial for addressing the multiple challenges facing the country, including the humanitarian crisis resulting from the influx of refugees from the Syria crisis.

Since the start of the Syrian conflict in 2011, over 1.7 million people have fled Syria to neighbouring countries and Lebanon has received the largest number of refugees in the region. There are currently more than half a million refugees from Syria in Lebanon, according to UN estimates. It is estimated that by the end of the year, refugees could make up 20 per cent of Lebanon’s population.

“As for the refugee crisis, the Security Council underlines the need for assistance on an unprecedented scale, both to meet the needs of the refugees and of host communities, and to assist the Lebanese authorities who face extraordinary financial and structural challenges as a result of the refugee influx.”