Posted on: July 18th, 2012 by AlYunaniya Staff No Comments 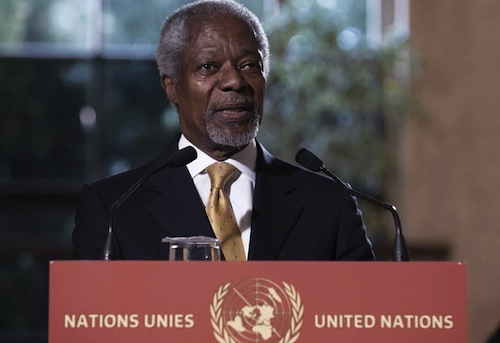 The UN Security Council delayed a vote on a Western-drafted resolution calling for sanctions against Damascus until Thursday following a request from international envoy Kofi Annan, diplomats said in a last attempt to get Western nations and Russia to agree on measures to halt the violence in Syria.

The Security Council is deeply divided as a draft resolution supported by key Western powers would impose non-military sanctions against Assad’s regime if it fails to withdraw troops and heavy weapons from areas in the country within 10 days , a key demand of the Annan plan while Russia calls for the “immediate implementation” of Annan’s plan and for a political transition approved earlier at the Geneva meeting, but excludes sanctions against Assad.

Russia and China, have blocked two previous resolutions until now calling for sanctions.

The mandate of the UN Supervision Mission in Syria, or UNSMIS, expires on Friday and without a resolution the UN may have to withdraw the nearly 300 unarmed observers currently in Damascus.

More than 17,000 people have been killed since a popular uprising against Assad began 16 months ago, activists say.